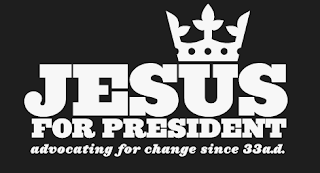 In an election season one issue comes to the front more than any other: character. Whether attacking another candidate's history or defending one's own consistency the underlying issue is almost always one of character. Attacking it, defending it, questioning it, and debating it. Character is ultimately what gives voter's confidence in what a candidate believed in the past and will do in the future. Not unlike politics, character of leaders of various religious movements counts as strong testimony to the legitimacy of their claims. It's one thing to say something, but it's a whole other thing to live consistently with what's said. If character counts for choosing political leaders, perhaps the credibility of religious leaders should be examined likewise.
In his brief theological treatise Basic Christianity, theologian John Stott provides Jesus' character as evidence for Christ's claims. The claims of Christ include those he made implicitly and explicitly during his time on earth documented in our extant New Testament writings. The greatest of these include his unique relationship with God, his own divine authority, and his miraculous acts. Since the claims of Christ are mulitply attested in early independent sources and consistently represented through 27 books of the New Testament, Stott concludes we're justified in calling them reliable. But even if we are to grant him that much, we must still ask ourselves - are they true?

Attempting to show reliability by merely stating that a claim is historical is misleading at worst and inadequate at best. Whether the claims were made in history is a different question than whether the content of those claims is true. After all, people can claim anything they want. There were so-called messiahs throughout and since second temple Judaism. As C.S. Lewis famously proposed, there are three options regarding our decision with the claims of Christ. If he wasn't Lord, the only remaining options are liar or lunatic (Lewis, C.S., Mere Christianity, London: Collins, 1952, p54-56). So to find out which claims are more likely true, it's important to examine life demonstrated by the one making the claims.

If the sort of things Jesus said are true, the evidence should be seen in how he lived his life. Whatever we may believe about him, it's clear what we know of Jesus is different from any other religious founder. Most notably, his character shows no flaws where we would expect to see them. For someone well acquainted with the doctrine of sinful man, we see in Jesus one who had no sin in him. He was tempted like we are, but never ever made the wrong moral choice.

When the rich man addressed him as "Good teacher" asking how he could inherit eternal life, Jesus replied, "Why do you call me good? No one is good except God alone" (Mark 10:17-18). What follows is one of two possible conclusions. Either Jesus is not good or he isn't God. The New Testament is consistent in it's message that Jesus lived without sin. Therefore, since moral perfection is "good," and only God is good, then Jesus is God. What we get with this verse is both the divinity of Christ and his own self-claimed moral perfection. Jesus also pointed to himself as the means of redemption for sinful man. Many more verses can be cited (see Greg Koukl's Jesus the Only Way: 100 Verses), but there's more than merely what Jesus said about himself.

Those closest to Christ agreed with him on this point. They lived with him, studied under him, and suffered for his sake. As devoted Jews they too understood the depravity of man, yet they upheld the testimony of Christ's sinlessness despite having every reason not to. While some witnesses explicitly state Christ's spotless nature (1 Pet 2:22, Heb 9:14, 1 John 3:5), the gospel writers seem only to mention it as an incidental aside from their primary message. While the sinful nature of all other central figures is exposed, Jesus, about whom much more is said, rests immune. While friendly witnesses would be expected to portray Jesus well, let's see what his enemies say of him.

As we might expect, Jesus' critics were unkind. They called him a blasphemer, friend of sinners, and sabbath breaker. In the proper context, these accusations were serious enough to portray him as a social outcast, rejected by God, and worthy of capital punishment. Ironically, it also speaks well of his character. The charge brought against him by the Jews was for insurrection which was a political crime rather than a moral one. Moreover, he was brought before King Herod and the Roman Procurator Pontius Pilate only to be found guiltless by both. His accusers depended on false witnesses, rejected his messianic identity, and misrepresented his claim to be king. Often overlooked, the silence of any accusations from earlier in his life should be noted. With the zeal of his enemies, it must have frustrated them greatly to have nothing but lies to use against him.

From how he's depicted by friends and foes alike we've seen Christ wasn't just sinless but the only one who ever was in a culture where universal human depravity was presumed. For most of us who grow closer in our relationship with God, our human sinfulness brightly contrasts from God's almighty perfection. However, as his followers learned more of Jesus' closeness with the Father, his utter absence of sin became even more apparent to all.

Unless his claims were true, the types of things he said would be that of a megalomaniac. Christ's claims centered around himself and that the destiny of mankind depend on how people respond to him. This truth comes as an unexpected paradox. Jesus taught that he "came not to be served but to serve and be a ransom for many" (Mark 10:45, Matt 20:28). He spoke of himself first in his words but put himself last by his deeds. He was misunderstood and rejected by his foes and even abandoned and betrayed by friends. Ultimately he was shamed, tortured, and killed for living consistently with his true message and identity. Amidst the scorn, he prayed for those who hated him. His teaching was unique and unpopular, yet he wasn't a fanatic. He simply spoke the truth and lived it consistently.
Posted by Dan at Tuesday, March 06, 2012

Regarding Mark 10 we read:
As Jesus started on his way, a man ran up to him and fell on his knees before him. “Good teacher,” he asked, “what must I do to inherit eternal life?”
“Why do you call me good?” Jesus answered. “No one is good—except God alone. You know the commandments: ‘Do not murder, do not commit adultery, do not steal, do not give false testimony, do not defraud, honor your father and mother.’”
“Teacher,” he declared, “all these I have kept since I was a boy.”
Jesus looked at him and loved him. “One thing you lack,” he said. “Go, sell everything you have and give to the poor, and you will have treasure in heaven. Then come, follow me.”

Note that Jesus does not tell the man that he must put his faith in Jesus, or that salvation is solely dependent on Jesus dying to atone for his sins.

That this passage caused embarrassment to Matthew is evident from the changes he made to Jesus’ words by removing his denial that he is good.
Here is Matthew’s altered version in 19:17 (compare this with Marks original)

A man asked Jesus, “Good teacher, what must I do to inherit eternal life?”
And Jesus said to him, ‘Why do you ask me about what is good? There is only one who is good. If you wish to enter into life, keep the commandments.’ (Instead of Mark’s original ‘why do you call me good?’)