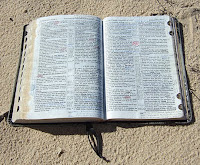 Interpretive conventions for any given text must begin by recognizing the genre, or type of communication, of the text itself. The majority of the Old Testament is comprised of prose narrative. In fact, narrative is the most common literary genre found in the Bible. These narratives “are stories—purposeful stories retelling the historical events of the past that are intended to give meaning and direction for a given people in the present."(1)

Biblical interpreters frequently distinguish between three levels of narrative.(2) The third (or top) level can be classified as the “metanarrative.” This is the grand, overarching, eternal, and universal plan of God worked out through human history. This is the most important level to comprehend because it focuses on God and His plan for His people. The second (or middle) level is the story of God’s people (both Israel and the Church) as found in the Old and New Testaments (or “covenants”). As applied to the Old Testament, this would specifically refer to the Israelites as God’s chosen people. Finally, the first (or lowest) level focuses on the stories of specific individuals within the narrative. Recognizing these three levels within the biblical text should aid the reader in understanding and sound application.

Unfortunately, many readers never get past the first level of individual stories which, in reality, are the least important. This commonly leads to problems both in interpretation and application. Biblical expositor Walt Russell points out two major mistakes that result when we fail to focus on God as the ultimate Hero in the story.(3)

The first mistake is a tendency to look at the individuals within the narrative as models depicting behavior we should imitate. This fails to recognize the difference between description and prescription. The Bible does not necessarily prescribe for us those actions and character traits it describes of certain individuals. In other words, “the narratives were written to show the progress of God’s history of redemption, not to illustrate principles. They are historical narratives, not illustrative narratives."(4) This is not to say that individuals within narratives cannot illustrate godly behavior. But it is God’s character and actions that should be the main focus (the top level) rather than those within the story. That being the case, “the purpose of individual narratives is to tell what God did in the history of Israel, not to offer moral examples of right or wrong behavior."(5)

The second common mistake is a tendency to over personalize the narratives and histories. Again, this takes away from the primary emphasis of God’s dealing with His people Israel. Russell explains:

…the narratives and histories of the Old Testament are about how God dealt with His old covenant people, Israel. From these dealings we can learn about who God is and how He may want to deal with us, His new covenant people. But before we can leap to the significance of the story for us, we must understand the meaning of the story for them! Personalizing the biblical account too quickly destroys this progression from meaning to significance. Also, we lose the biblical text’s emphasis on God as the Hero of the narrative.(6)

One additional mistake that should be avoided is the allegorizing of narratives. Old Testament narratives should not be viewed as allegories filled with hidden meanings.(7) The text had a literal and historical meaning for its original hearers. The responsibility of the reader is to discover this original meaning and then move on to appropriate application. Allegorical interpretations would have been foreign both to the original author and original hearers.

How should Christians approach narratives as informed readers and interpreters? Several principles need to be remembered:

First, pay attention to the narrator of the story and what he emphasizes. The inspired narrator helps readers understand the account from the divine point of view.(8)

Second, pay attention to the dialogue. The dialogue informs readers regarding the story plot, the character of the speaker, as well as summarizing the most important parts of the narrative through character speech.(9)

Third, pay attention to repetition. Repeating key words or ideas is a method the narrator uses to draw attention to the most important concepts and themes that readers need to remember.

Fourth, read narratives in large portions and preferably in one sitting. This will help develop an overall understanding of the passage and its context.

Fifth, remember that “no Bible narrative was written specifically about you."(10) Reading with a “me-centered” approach is misguided and will result in a narcissistic and individualistic interpretation.

Lastly, remember that God is the Hero. The most “crucial thing to keep in mind as you read any Hebrew narrative,” notes Fee and Stuart, “is the presence of God in the narrative. In any biblical narrative, God is the ultimate character, the supreme hero of the story."(11)