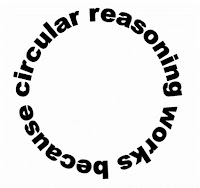 Probably one of the most frequent logical fallacies you'll come across in debates or dialogue is referred to as "circular reasoning" or "begging the question." In Latin it is called petitio principii which means "request for the source." This fallacy may take several forms but one of the most common occurs when the arguer assumes the truth of the conclusion he is trying to prove.

For example, some Christians have wrongly argued this way:

Notice in this dialogue the Christian is assuming that God exists and wrote the Bible in order to prove that God exists. This commits the logical fallacy known as "begging the question." The arguer cannot assume the truthfulness of the conclusion he is attempting to prove.

However, non-Christians are just as prone to logical fallacies and the following are some common examples.

Well known Scottish skeptic David Hume stated in On Miracles, "A miracle is a violation of the laws of nature; and as a firm and unalterable experience has established these laws, the proof against a miracle, from the very nature of the fact, is as entire as any argument from experience can possibly be imagined" (My emphasis).

Unfortunately Hume is begging the question. Notice he makes the claim that a firm and unalterable experience counts against the belief in miracles. In other words, testimony and experience count 100 percent against miracles! But how would Hume know this? C.S. Lewis addresses this nicely in his book Miracles:

Now of course we must agree with Hume that if there is absolutely "uniform experience" against miracles, if in other words, they have never happened, why then they never have. Unfortunately, we know the experience against them to be uniform only if we know that all the reports of them are false. And we can know all the reports of them to be false only if we know already that miracles have never occurred. In fact, we are arguing in a circle.

The entire abortion debate centers around one question: What is the unborn? Many arguments in favor of the pro-abortion choice position beg the question by assuming the unborn is not a human being.

For example, some pro-abortion choice advocates argue that "A woman has the right to do what she wants with her own body." This begs the question by assuming the woman's body is the only one involved. If the unborn is a human being there are two human beings and two human bodies involved. Furthermore, it is never the woman's body that gets aborted. The woman survives the abortion, the unborn doesn't.

Circular Reasoning was used by the Jewish High Priests against the Lord Jesus. They brought Jesus to the Roman judge for condemnation. Since the Roman jurisprudence laid down a strict procedure, the judge to follow the path of: Accusation -> Cross Examination -> Crime Proved -> Conviction -> Punishment. But this time they wished to the "Punishment" to follow arrest. The argument was: We arrested him, so punish him. But why punish him. Because he is a criminal. How can you say he is a criminal. The very fact that we arrested him proves he is a criminal, and so on. But when the judge examined Him procedurally, he had to declare, "I find no guilt in Him".

The section about Jesus' existence is, itself, logically fallacious. If the questions is "Did or did not Jesus exist?" then it doesn't matter who says what about his existence. This question, of existence, is metaphysical.

The paragraph refers to the epistemological question of how one might know, if it is possible to know, whether or not Jesus existed. Stories about Jesus existing do not speak in any way to whether or not he actually existed. This is true also of common characters, about whom much has been written, but are widely know to have never physically existed.

My point is, inability to disprove all stories of Jesus' existence is in no way equivalent to proof of his existence. The stories may or may not make it make more sense to believe one way or the other, but in reality have no bearing on the fact of the matter.

The person who says "Jesus never existed" is indeed making a metaphysical claim about reality and/or history. However, the person who says this is also making a knowledge claim, i.e., they are claiming to know that Jesus never existed. It is a claim to knowledge (epistemology) about ultimate reality (metaphysics). If they are not claiming to know this, their comment can simply be ignored or dismissed.

So then the question becomes, how do they know this? How do they know Jesus never existed? This is where we need to be careful of circular reasoning.

Stories about Jesus existing do not speak in any way to whether or not he actually existed.

I'm not even sure what you mean by this. Why would historical documents written in the first century recording the life and deeds of Jesus of Nazareth not speak in any way to whether or not He actually existed? How exactly do you conduct historical research on historical persons? Do you carry this over to all historical persons?

If you dismiss them as mere "stories" you are falling into circular reasoning again.

This is true also of common characters, about whom much has been written, but are widely know to have never physically existed.

Once again, you yourself need to be careful of begging the question here.

My point is, inability to disprove all stories of Jesus' existence is in no way equivalent to proof of his existence.

I didn't say that it was, and that is not my position. This is a straw-man.

The stories may or may not make it make more sense to believe one way or the other, but in reality have no bearing on the fact of the matter.

How do you know logic shouldn't be circular? Did log tell you that?

Re abortion: This also begs the question of "its the womans body" Does it not take two to make a child? Therefore why does the woman get the sole rights to abort?

Are you assuming the laws of logic in questioning the circularity of logic?

Aaron, are you using logic to show me that the laws of logic exist? :)

The trilemma does not reign supreme. The laws of logic are axiomatic. You cannot deny them without using them. I am not sure why recognizing these undeniable truths as foundational would be considered "arbitrary."

The trilemma specifically says that one must rely either on circular logic, endless regress, or AN AXIOM, so you are proving my case. But why should the laws of logic be axiomatic and not something else? Why not experience? Or God Himself?

The trilemma specifically says that one must rely either on circular logic, endless regress, or AN AXIOM, so you are proving my case.

You are correct, I would hold that the laws of logic are axiomatic. When you said the trilemma reigned supreme, I thought you were implying there was no solution, as if you were placing me on the "horns of a trilemma."

But why should the laws of logic be axiomatic and not something else? Why not experience? Or God Himself?

Are you denying the laws of logic are axiomatic? If you want to make a case for experience, you are more than welcome. As for God, there are some philosophers, such as Alvin Plantinga, who hold that belief in God is properly basic.