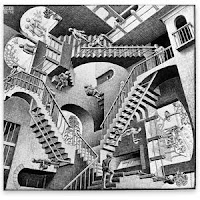 "There is no truth!"

How many times have you heard that before?

In their book I Don't Have Enough Faith to Be an Atheist, authors Norman Geisler and Frank Turek provide one of the most valuable tools and tactics a clear-thinker needs to master and have in their arsenal:

If someone said to you, "I have one insight for you that absolutely will revolutionize your ability to quickly and clearly identify the false statements and false philosophies that permeate our culture," would you be interested? That's what we're about to do here. In fact, if we had to pick just one thinking ability as the most valuable we've learned in our many years of seminary and postgraduate education, it would be this: how to identify and refute self-defeating statements.(i)


What is a self-defeating statement?

A self-defeating (or self-refuting) statement is one that fails to meet its own standard. In other words, it is a statement that cannot live up to its own criteria. Imagine if I were to say,

I cannot speak a word in English.


You intuitively see a problem here. I told you in English that I cannot speak a word in English. This statement is self-refuting. It does not meet its own standard or criteria. It self-destructs.

The important thing to remember with self-defeating statements is that they are necessarily false. In other words, there is no possible way for them to be true. This is because they violate a very fundamental law of logic, the law of non-contradiction. This law states that A and non-A cannot both be true at the same time and in the same sense. For example, it is not possible for God to exist and not exist at the same time and in the same sense. This would violate the law of non-contradiction. So if I were to say, "God told me He doesn't exist" you would see intuitively the obvious self-refuting nature of this statement.


How do you expose self-defeating statements?

Simple: you apply the claim to itself. This is what Geisler and Turek call the Road Runner Tactic and what Greg Koukl refers to as The Suicide Tactic (see chapter 7 of his book Tactics).

Below each self-defeating statement is an explanation of why it commits suicide along with suggestions on how you can respond. If this is your first time dealing with self-refuting statements you may need to read them a couple times. Stop and reflect on what the statement is saying and then see if you can identify its self-refuting nature.

Feel free to leave comments with your own favorite self-defeating statements and I will add them on. Enjoy!

If there is no truth this statement itself cannot be true. Therefore, truth exists. You cannot deny truth without affirming it. You might respond, "Is that true?" or "How can it be true that there is no truth?"

4. All truth is relative.

This statement is self-refuting because it claims that truth is relative to the individual and yet at the same time implies it is objectively true that something can be "true for you but not for me." This statement commits the self-excepting fallacy. You might respond, "Is that just true for you, or is it true for everybody?"

6. There are no absolutes.

This statement is an absolute statement about reality that claims there are no absolutes. You might respond, "Are you absolutely sure about that?"

7. No one can know any truth about religion.

8. You can't know anything for sure.

9. You should doubt everything.

10. Only science can give us truth.

11. You can only know truth through experience.

12. All truth depends on your perspective.

14. You shouldn't force your morality on people.

The person who tells you to "live and let live" isn't allowing you to live how you want! They are prescribing behavior for you rather than taking their own advice. You might respond, "If that's your philosophy, why are you telling me how to live?"

17. You shouldn't try to convert people.

This statement is self-refuting if it treats an objective statement as if it were subjective. This is the subjectivist fallacy. The hidden assumption is that your view is relative and a matter of personal opinion. If that is the case, this statement can also be relativized and made into a matter of personal opinion. You might respond, "Well that's just your view that this is just my view."

19. You should be tolerant of all views.

Most statements regarding tolerance are self-refuting if by "tolerance" the person means "accepting all views as equally true and valid." If that is the case, the person who says "You should be tolerant of all views" isn't being tolerant of your view! You might respond, "Then why don't you tolerate my view?"(ii)

20. It is arrogant to claim to have the truth.

(i) Geisler and Turek, I Don't Have Enough Faith to Be an Atheist, 38.

(ii) Note: true tolerance means "putting up with error" and carries with it the idea of respect and value with regards to persons. This is in contradistinction to the postmodern definition of tolerance which means holding all truth claims as equally true and valid.
Posted by Aaron at Saturday, October 03, 2009

i enjoyed your post. Reminds me of Ravi Zacharias! Thanks!

For example, rather than exclusively saying that only experience or science can bring you truth, one might say that science and experience (empiricism) are generally the BEST ways to know truth. Logic and reasoning is often required to interpret evidence, or to make a best guess when one lacks evidence, but having the most information and evidence as possible in the first place is essential to making proper conclusions from logic and reasoning. The farther we get away from the evidence, the more of a chance our logic will be flawed. Similarly we often can make "intuitive leaps" to come to a successful conclusion, but often our intuition is wrong.

Similarly with the statement "thats just your view." The person is simply stating their opinion is that your religious views are only an opinion. Which of course, they are right to do so. One can state one's opinion that what someone else is stating is ALSO an opinion, without being self-contradicting. Generally what people are trying to say is "You have an opinion, and I have an opinion, and they differ. lets leave it at that."

Many of these contradictions are merely a language issue, like the old problem "Can God create a stone so heavy he can't lift it?" The wording implies a contradiction. However, this is a problem with the wording, not with the concept (omnipotence.) Omnipotence, is a valid concept, its just the way this question is worded makes it sound contradictory.

Of course, I think its impossible not to judge or have views or opinions. The issue is not whether they affect other people (they will) but to what extent. Repeatedly proselytizing your religion to someone else who has already expressed a lack of interest seems to cross the line, which is what many of these statements are designed to combat. I can ask you to not proselytize your religion to me without being contradictory. Of course, I am trying to "convert" you to being a non-proselytizer, at least as far as myself is concerned, but I'm not trying to convert you to an entirely different worldview, which is far more invasive.

Finally the statement "its arrogant to claim to have the truth" I agree is self-contradictory, since itself is a truth statement. We all have SOME truth, whether its truth of our own existence or that the sun will come up tomorrow. However, usually when people say this, they are not denying the existence of all truth. They are saying it is arrogant to claim one has the COMPLETE truth or PERFECT truth. We all generally recognize that we are missing bits of our knowledge, that we don't have the complete picture. At times, evangelicals come across as if they have that complete picture and that they have solved all the mysteries of life and death. Socrates said "And how is not this the most reprehensible ignorance, to think that one knows what one does not know?" He knew it was humility to realize the limitations of your knowledge such as what happens after death or how the universe was created. That itself is a great truth, not a denial of truth in total. I realize i have some truth, but also that there is a lot I don't know.

I agree with Fregas. Many of these are simply tripping people up with expressing an idea poorly, or just pointing out that some ideas are hard to express in a way that aren't contradictory if taken literally.

I guess you could, but it would be a smart alec response that ignored the point being made. Perhaps the man should instead say "The only thing I can be sure of is that I can't be sure of anything apart from the sentence I am currently saying", but really, does he have to phrase it like that to make his point understandable?

There are certain situations that are simply hard to describe in our language. If you're setting out an exam paper and you print on one page "This page has been intentionally left blank", then the very writing of that means the page is no longer blank, but people should get what you mean.

Just letting you know, I used a quote from your article on my blog. https://faithshouldmakesense.wordpress.com/2015/04/18/what-is-truth/ (I linked back to your blog.)Thanks for posting this... a lot of helpful info.

How does Socrates know That?!! See, even old so-crates (Fast times) used self defeating statements

This is mostly nonsense..twisting contexts just to feel that you can "compete" in a back and forth verbal argument with someone who may disagree with you? Very paranoid.

No, science is just one way. To say it's the best way is incoherent. Thats the point. Its a fallacy and there is no way to reword it ...its defeater is obvious ....
..."the best way" is not determined by science, hence its self refuting.

Besides all that, its definition has become mangled by atheists who have flocked to the fields of Origins to promote their worldview.

If I pick my nose and 2 times out of 20 it bleeds, I may say to my wife that picking my nose sometimes makes my nose bleed. That's technically science. Humans have used science, every day, since man walked the earth. If my hand gets burned when I stick near fire and I pull it away... That is science.

Today, its meaning is Not what we use every day---its a dungeons and dragons club for weirdos. Ask Bill Nye the disgraced Science Guy. If we put real science back into the group of tools we use to determine Truth maybe these fallacies like "I have no free will" or Free will is an illusion will more forcefully separate the real weirdos from the rational humans.