Do All Religions Lead to God? 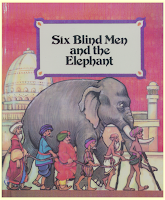 This parable is often used to illustrate a view known as religious pluralism. Like the blind men, no religion has the truth. Rather, all religions are true in that they accurately describe their personal experience and the spiritual reality they encounter, given various historical and cultural backgrounds.

There are various types of religious pluralism, but one way to define it is as follows: "the view that all religious roads - certainly all major or ethical ones - lead to God or to ultimate reality and salvation."1 This idea is commonly reflected in such statements as "All religions basically teach the same thing" or "All roads lead to the top of the mountain."

The elephant parable, while attractive to many, suffers from a number of problems:

Problem #1: The parable is an analogy, not an argument.

An argument is a conclusion supported by reason or evidence. But notice that the elephant parable is simply an analogy (or illustration). No arguments, evidence, or reasons are given as to why we should believe that all religions are true. The elephant analogy is simply a story. But the story may be false! In other words,

In fact, a Christian could just as easily conceive of an analogy which "proves" the truthfulness of the Christian faith:


Let's switch the analogy: If Jesus is truly unique, maybe the world's religions are like a maze or labyrinth with one way out; what if God in Christ steps into this maze to help us walk through it?3

This analogy doesn't prove that Christianity is actually true, does it? Likewise, the religious pluralist must do more than offer illustrations.


Now this view, which one often hears expounded by laypeople and college sophomores, is rooted in ignorance of what the world's great religions teach. Anyone who has studied comparative religions knows that the worldviews propounded by these religions are often diametrically opposite one another. Just take Islam and Buddhism, for example. Their worldviews have almost nothing in common. Islam believes that there is a personal God who is omnipotent, omniscient, and holy, and who created the world. It believes that people are sinful and in need of God's forgiveness, that everlasting heaven or hell awaits us after death, and that we must earn our salvation by faith and righteous deeds. Buddhism denies all of these things. For the classical Buddhist ultimate reality is impersonal, the world is uncreated, there is no enduring self, life's ultimate goal is not personal immortality but annihilation, and the ideas of sin and salvation play no role at all. Examples like this could be multiplied.4

Religious pluralism is patently false because it violates the known laws of logic. For example, the law of non-contradiction states that A and non-A cannot both be true at the same time and in the same sense. God cannot be both personal and impersonal. God cannot both exist as a Trinity and not exist as a Trinity. Since various religions teach contradictory things, all religions cannot be true. Religious pluralism violates the law of non-contradiction and is therefore necessarily false.

Problem #3: The parable begs the question.

Remember, the question under consideration is whether or not the different religions of the world are really experiencing and/or describing the same reality or God, albeit in a limited sense. But the parable begs the question by starting with the assumption that the blind men are in fact doing this very thing! In other words, the parable tells of the blind men feeling or experiencing different parts of the elephant (reality/God) which is the very thing under debate.


In fact, he wouldn't know that the blind men were wrong unless he had an objective perspective of what was right! So if the person telling the parable can have an objective perspective, why can't the blind men? They could - if the blind men suddenly could see, they too would realize that they were originally mistaken. That's really an elephant in front of them and not a wall, fan, or rope. We too can see the truth in religion. Unfortunately, many of us who deny there's truth in religion are not actually blind but only willfully blind. We may not want to admit that there's truth in religion because that truth will convict us. But if we open our eyes and stop hiding behind the self-defeating nonsense that truth cannot be known, then we'll be able to see the truth as well.5


Problem #5: The parable is self-defeating.


Attempts to reduce all religions to their lowest common denominator usually succeed only in distorting them. Homogenizing religions is a costly price to pay to eliminate religious diversity, for in the end the religions must sacrifice the very features that make them unique and appealing in the first place.6


Problem #6: The parable is radically skeptical.

Ken Samples elaborates on this point:


The elephant analogy implies a radical skepticism concerning knowledge of God; namely, that no one, or in this case no religion, can really know God satisfactorily. But if God is by and large unknowable, then how is a person able to know that God is unknowable? In fact, for that matter, would anyone even know that God exists?7

Furthermore, Christians would argue that God has in fact revealed Himself both in general revelation (creation and conscience) and special revelation (Scripture and Christ). If Christianity is true, then we can abandon our radical skepticism concerning knowledge of God in favor of the radical claims of Christ: "Anyone who has seen me has seen the Father" (John 14:9).

Problem #7: The parable proves the opposite.

While this parable is used with the intention of showing that all religions are true, the exact opposite conclusion could be drawn: all religions are in fact false! Why? Because none of the blind men have an accurate picture of the elephant! Ken Samples again explains:


Ironically, while the elephant analogy attempts to validate the truth of all religions, if taken to its logical conclusion the story really shows that all religions fail to identify God adequately. So rather than affirming religious truth, the analogy implies that all religions, at least in large measure, are based on false or misleading claims.8

I was not aware that the parable of the blind men & the elephant was used to exhibit religious pluralism. I am a disciple of Christ, who I acknkowledge to be the only Way, the Truth, & the Life. However, I have often used this parable to illustrate the point that as followers of God, we often "grasp on" to a particular isolated attribute of God's and emphasize that attribute, sometimes to the neglect of facets of His character. Such is the tendency of finite, limited people, even His well-meaning followers.

I've taught our youth church kids this same lesson except for the last point that it ironically "teaches the opposite." And that's the best part! The popularity of this parable thrives on the 30 second sound-byte culture which is religiously illiterate. We need more 30 second sound-byte blogs like this one to show how stupid these analogies are. Well done.

Thanks for this great reminder. This type of pluralism is becoming more and more popular. Thanks!

This is a topic that is important to review regularly, because it is such an easy trap for uncritical thinkers to fall into. Pluralism is great, because everyone gets to be right, and no one has to be judgmental.

Of course, this argument not only assumes that individuals are incapable of knowing the truth about God, but that God is either unwilling or unable to reveal the truth about himself to us.

Great post!
Pluralism sounds all nice and tolerant, but if we are tolerating error is that really a good thing? You do an excellent job of pointing out the silliness of this claim

Great article! I featured it here.

I think you could have added #8 (opr maybe #5b, since the two points are somewhat related): Truth, by it's nature, is exclusive.

When I was a young Christian, there was this person known to me who shared me the idea of pluralism. I rejected the idea because it would make God of the bible a liar by saying Christ is the only way (Acts 4:12). The fact that at least one religion claim other religions are false, is enough of a proof pluralism is false.