The Facts of the Resurrection in 1,000 Words 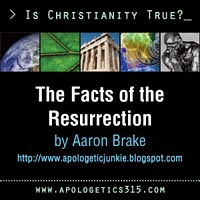 This essay originally appeared in a series entitled "Is Christianity True?" Visit Apologetics 315 to read all the contributions and download the audio versions.

“The evidence for the resurrection is better than for claimed miracles in any other religion. It’s outstandingly different in quality and quantity.”
— Antony Flew

The truth of Christianity stands or falls on the bodily resurrection of Jesus Christ. As Paul himself said, “If Christ has not been raised, our preaching is useless and so is your faith.”1 Here the Apostle provides an objective criterion by which to judge the legitimacy of the Christian worldview. Show that Christ has not been raised from the dead and you will have successfully proven Christianity false. Consequently, it is entirely appropriate that a positive case for “Why Christianity is true” focus on the most central truth claim of the Christian faith: the Resurrection.
(MP3 Audio | RSS | iTunes)

The approach I will take in this essay is commonly referred to as the “minimal facts approach.” This method “considers only those data that are so strongly attested historically that they are granted by nearly every scholar who studies the subject, even the rather skeptical ones.”2 It should be noted this approach does not assume the inerrancy or divine inspiration of any New Testament document. Rather it merely holds these writings to be historical documents penned during the first century AD.3 Though as many as 12 minimal facts surrounding the death and resurrection of Christ may be examined,4 the brevity of this essay limits our examination to three: the crucifixion, the empty tomb,5 and the post-resurrection appearances. I contend that the best explanation for these minimal facts is that Jesus was raised bodily from the grave.

Fact #1 – The Crucifixion of Jesus

Perhaps no other fact surrounding the life of the historical Jesus is better attested to than His death by crucifixion. Not only is the crucifixion account included in every gospel narrative6 but it is also confirmed by several non-Christian sources. Some of these include the Jewish historian Josephus, the Roman historian Tacitus, the Greek satirist Lucian of Samosata, as well as the Jewish Talmud.7  Josephus tells us that “Pilate, at the suggestion of the principal men among us…condemned him to the cross…”8 From a perspective of historiography, Jesus’ crucifixion meets the historical criteria of multiple, independent and early eyewitness sources, including enemy attestation. John Dominic Crossan, non-Christian critical scholar and co-founder of the Jesus Seminar, puts it this way: “That he was crucified is as sure as anything historical can ever be.”9

Something happened to the body of Jesus. Of this we can be sure. Not only was Jesus publicly executed in Jerusalem but “His post-mortem appearances and empty tomb were first publicly proclaimed there.”10 This would have been impossible with a decaying corpse still in the tomb. “It would have been wholly un-Jewish,” notes William Lane Craig, “not to say foolish, to believe that a man was raised from the dead when his body was still in the grave.”11 The Jewish authorities had plenty of motivation to produce a body and silence these men who “turned the world upside down,”12 effectively ending the Christian religion for good. But no one could. The only early opposing theory recorded by the enemies of Christianity is that the disciples stole the body.13 Ironically, this presupposes the empty tomb.

In addition, all four gospel narratives attest to an empty tomb and place women as the primary witnesses.14 It is hard to imagine this being an invention of the early church considering the low social status of women in both Jewish and Roman cultures and their inability to testify as legal witnesses.15  As with the crucifixion, the account of the empty tomb meets the historical criteria of multiple, independent and early eyewitness sources, including implicit enemy attestation as well as the principle of embarrassment. Atheist historian Michael Grant concedes that “the historian… cannot justifiably deny the empty tomb” since applied historical criteria shows “the evidence is firm and plausible enough to necessitate the conclusion that the tomb was indeed found empty.”16

In 1 Corinthians 15:3-8 Paul recounts what biblical scholars recognize as an early Christian creed dating to within a few years of the crucifixion. Included in this creed are all three of our minimal facts: the death of Jesus, the empty tomb, and the post-resurrection appearances. Atheist New Testament scholar Gerd Lüdemann states, “the elements in the tradition are to be dated to the first two years after the crucifixion of Jesus…not later than three years…the formation of the appearance traditions mentioned in 1 Cor. 15:3-8 falls into the time between 30 and 33 C.E.”17 The early date of this creed rules out the possibility of myth or legendary development as a plausible explanation and demonstrates that the disciples began proclaiming Jesus’ death, resurrection, and post-resurrection appearances very early.

Furthermore, the disciples sincerely believed the resurrection occurred as demonstrated by their transformed lives. Eleven early sources testify to the willingness of the original disciples to suffer and die for their belief in the resurrection.18 Many people will die for what they believe to be true but no one willingly suffers and dies for what they know to be false. Liars make poor martyrs. Again Lüdemann acknowledges, “It may be taken as historically certain that Peter and the disciples had experiences after Jesus’ death in which Jesus appeared to them as the risen Christ.”19 Appealing to hallucinations as an explanation simply won’t work. Hallucinations are private experiences requiring the proper frame of mind. They cannot explain such facts as the empty tomb, the conversions of skeptics like Paul and James, nor the multiple and varied resurrection appearances.20 As with the crucifixion and empty tomb, the post-resurrection appearances meet the historical criteria of multiple, independent and early eyewitness sources.

How do we know Christianity is true? Because Jesus was resurrected and “God wouldn’t have raised a heretic.”21 Jesus’ resurrection fits the context of his life, vindicating His teachings and radical claim to be the unique divine Son of God. Naturalistic explanations such as legendary development, fraud, or hallucinations fail to account for all the relevant data. Conversely, the Resurrection Hypothesis accounts for all of the known facts, has greater explanatory scope and power, is more plausible, and less ad hoc.22 Only if one is guided by a prior commitment to philosophical naturalism will the conclusion “God raised Jesus from the dead” seem unjustified.
__________________________________

1 1 Cor. 15:14. All Scripture quotations are from the NIV unless otherwise noted.
2 Gary R. Habermas and Michael R. Licona, The Case for the Resurrection of Jesus

, 56-62.
19 Gerd Lüdemann, What Really Happened to Jesus?: A Historical Approach to the Resurrection

. Translated by John Bowden. Minneapolis: Fortress, 1994.
7. Lüdemann, Gerd. What Really Happened to Jesus?: A Historical Approach to the Resurrection

I think you have made an attempt to remove your belief from the realm of faith. It is, after all, the Christian Faith. Your attempt to remove it from that realm seems to be inadequate. You want your faith to be so historically based that it becomes something else. Based on your approach, faith seems to be left out of the equation. It seems to be a dangerous argument and defense for your Faith. Either Jesus was raised from the dead or he wasn't. Where's the need for faith in your approach? I am somewhat mystified.

Thanks for your thoughts. Your comments here are true only if you define "faith" in terms of "blind faith" which is opposed or contrary to reason.

When you think of biblical faith, think of the word "trust." As our evidence for Christianity grows, our trust and confidence grows as well.

If faith were opposed to reason, then the best thing we could hope for is for the body of Jesus to be discovered. Then we could really have faith!! But obviously that cannot be biblical faith. Paul says if Christ has not been raised our faith is worthless and we are still in our sins, and we of all men are the most to be pitied.