The "Whatever" Objection and the Passivity Problem 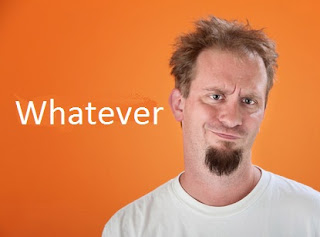 Armed with a master’s degree in apologetics I felt like I could conquer the world. Bring on the most ardent atheist and I'd be ready. My training prepared me to launch informed arguments and counter the toughest objections. To my surprise, the biggest challenger however wasn't the outspoken critic but the one who spoke the least - the passive skeptic who just didn't care. I quickly learned that the word no passionate apologist wants to hear is "Whatever."

Hearing my friend utter that word, I thought, "How could you not care?!" Salvation from sin, eternal life, reunited with saints, and reigning with God as kings is too good to pass up. I kept noticing other friends and colleagues voicing much of the same though not always using the "W" word verbatim. I realized my God-given fascination for apologetics and passion to share what I've learned wasn't something I had in common with people around me. I've come to see that listening to a debate on my iPod while running the Manhattan Beach 10-K wasn't normal.


The goal of this post is not to teach the reader how to convince someone that spiritual decisions matter. That task I leave with other writers and ultimately in the working of the Holy Spirit on the hearts of men. My goal is a more humble one; to explain this passivity towards religious ideas and what drives it. It's my hope that a greater understanding of this will better prepare apologists for encountering passive skeptics.

Perhaps passivity's greatest appeal is its simplicity and apparently neutral stance. It's easy to be passive and comes quite naturally to us. Since Adam sat idle while Eve took the forbidden fruit in Eden, many have followed suit by failing to act appropriately when our very lives depend on how we respond. It takes effort to investigate and decide on religious questions. It's easier to dismiss religious truth altogether than to live consistently with a position and defend it. The appeal of taking a passive stance towards religion is amplified by at least three other aspects of modern culture :

1) Church/State Separation
The establishment clause and litmus test of the constitution prohibits the government from endorsing a particular religion through legislation or public employment. Children raised in public schools are taught that religious ideas are not appropriate topics in classroom discussions. Apart from parental and church influences, there's nothing stopping this religious silence from continuing into adulthood. Confusion of the law leads teachers to err on the side of eliminating all religious ideas from the classroom (except for the view that religious ideas aren't to be discussed). It also has been misconstrued to mean all religion is to be relegated to the personal realm as irrelevant to important world issues. If religious ideas are important, why are children unable to ask, share or inquire about them in public schools? The implication taught to kids is that religion isn't important. Kids are taught religion is personal and not for public discussion. While the intent may have been to prevent government from limiting religious expression, interpretation by the courts and the media have made the opposite effect of teaching generations of school kids to keep religion to themselves.

2) View of Knowledge
The two most common alternative worldviews to theism today are postmodernism and naturalism. While the impact of these minority views is sometimes overstated, the prevalence of scholarship from both views has influenced how popular culture constitutes knowledge. Theists have traditionally maintained that the supernatural can be investigated and counted as knowledge. Proponents of scientism or empiricism insist knowledge is only that which can be tested methodologically. Postmodernists remain skeptical about both and suggest we can't know anything for sure. The mix of epistemological choices inevitably fosters doubt when it comes to religious knowledge. Accordingly, religious ideas are relegated to the subjective realm where truth doesn't matter.

3) Human Flourishing
As our culture gradually devalues the influence of theism, our view of human flourishing continues to change. When the spiritual component of a worldview erodes, the focus naturally shifts to the earthly life. From an eternal view, a purpose greater than mankind and individual achievement is in view. However, those focusing only on an 80 year lifetime will inevitably look to maximizing survival and self-satisfaction as the highest priorities. If human flourishing doesn't include life beyond the grave, there's no reason to spend much time focusing on anything else.

So a passive approach to religion is easy and socially acceptable, but I've often heard it said that the real reason for ignoring religious claims is insufficient evidence. To that claim I'm a skeptic. People ignore serious consequences all the time even when the evidence is undeniable. Take for instance the following example.
Having arrested and interviewed many federal felons in my career as a government agent, I've observed things about human nature that I may never have seen otherwise. We have much to learn about our own humanness by looking into the actions of others, even felons. The pattern I see repeat itself is this: 1) crime happens, 2) suspect is arrested, 3) suspect is "sorry," 4) suspect is punished, 5) suspect returns to crime.
Surely this is a generalization from my own anecdotal observations and there are exceptions. On the other hand, it's not just a jaded view I learned in law enforcement either. When presenting search warrant affidavits to prosecutors, they ask if the suspect has a criminal history. Why? Because they know the practical reality of the truism that there is no better indicator of future behavior than past behavior. The point is that people commit crimes even knowing how bad the consequence are.

This phenomenon so permeates humanity that it's seen in many other ways as well. Ironically, crime victims themselves are known to continue behavior despite knowing the loss they will encounter. Victims of financial fraud or physical abuse are among the most common. Children who watch their parents die painful deaths grow up taking on the same unhealthy lifestyle of smoking, overeating, or drinking. They do this even while the evidence of the consequences are very real and painfully ever present to them.

Even the blessed people written in Scripture had this problem. The Old Testament is replete with examples of Israel rebelling even after seeing miraculous acts of God in front of them. In the New Testament, Judas, the Pharisees and Sadducees, and other skeptics witnessed Jesus' miracles yet still rejected him. So it's not all about the evidence. Some may honestly be unaware of the result of their actions but many people know the reality of where their actions lead while continuing the course anyway.

While these examples show that people frequently disregard the costs of their decisions, they differ from religious matters in two respects: First, religious decisions are more serious. They have eternal ramifications as opposed to temporary suffering in this world only. Second, the effects of religious missteps are less visible. Sometimes we can see a payoff by living a Christ-centered life but other times the life is filled with just as much pain and suffering or more. The effects of our response to spiritual claims are sometimes not fully realized until after our death. The first reason makes our mission more important but the second makes it more difficult.

Despite this challenge, evangelism is a core part of Christianity and we must proceed cautiously. However well-intentioned and educated a passionate believer may be, misunderstanding or ignoring the perspective of the skeptic can lead to unfortunate mistakes. Like speaking English to rural Chinese farmers, we won't even get started unless we first appreciate what they understand.

In a religiously illiterate culture where spiritual conversation is taboo, many assume the world is limited to this life only. A life aimed at selfish ambition, material wealth, and entertainment-on-demand leaves no time to follow Christ's lead to love the lost. Scripture says the gospel is foolishness to those who don't believe but also reminds us that we too once were lost. In other words, there's hope for passive skeptics just like there was hope for us. As we pray for our friends we must be mindful that they're watching us. So when the topic comes up, never miss an opportunity to give them a reason to care and never shrug and say "Whatever."
Posted by Dan at Wednesday, February 08, 2012