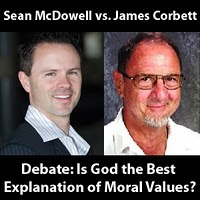 Success!!! Despite a few hiccups in pre-event planning, last night's McDowell-Corbett debate went incredibly well. Saddleback College was buzzing with students, families, scholars, and local citizens lucky enough to get a seat in an event that sold out weeks in advance over a period of about 10 days. Sadly, we had to turn away over three times the number as our room could hold but the webcast was viewed by over a 1,000 people from around the globe. In fact, Conversant Life told me that so many people logged in at one time that the server crashed three times (sorry about that livestream viewers). I would be remiss not to thank Karla Westphal (Saddleback College Freethinkers Club faculty advisor) for hosting the event and handling lots of logistics. I wouldn't have wanted anyone else in her role.

Both speakers were articulate and dynamic which kept the audience captivated the entire 95 minutes without a break. Craig Hazen set the tone with his trademark wit and cordial demeanor. I witnessed first hand his unbroken contact with the timekeeper and even-handed treatment of speaker time limits. The only exception was when he granted Corbett an additional response in the Q&A portion. He even kept the course on track to about three minutes of our planned end time. Amazing work, Dr. Hazen! My only fear is the backlash I'm going to get from all those unable to attend now that Craig and Sean gave away free books and DVDs to everyone there (again, sorry webcasters).

Sean spoke first, as is customary of the positive debate position, and set the bar high for his opponent. Sean layed out his case in outline form stating two key contentions to frame the debate. 1) If God does not exist, we have no solid foundation for moral values, and 2) If God does exist, we do have a solid foundation for moral values. Sean carefully made the distinction between subjective and objective with Greg Koukl's famous ice cream illustration. He told the story of a terrible teen gang rape to show what it means for something to be objectively wrong. Sean argued that any ethical system must account for three things: 1) Transcendence, 2) Free will, and 3) Human value. Concluding that God makes the most sense of moral values, Sean then challenged Dr. Corbett to offer a better explanation.

Dr. Corbett took to the podium with a blank screen comparing Sean's powerpoint slideshow to an XBox console while labelling his own low-tech presentation as a "space-invaders, Atari version." Corbett conveyed his concern for Sean's claim to certainty and illustrated examples around the world and through history where religious claims to knowledge actually cause more dissent and suffering than secular societies. Jim said that Sean's position is unacceptable because no one can know the mind of God. He criticized Sean for demonstrating certainty in his position, implying that the most noble position is one of humble doubt. He especially questioned Sean's reliance on an authoritarian view of ethics whether from religious doctrine or a transcendent God.

I must confess that I missed a bulk of the the next few rebuttal speeches because I had to help my atheist/agnostic friends sort through audience question cards, but I have a feeling the more interesting portion was the cross examination period.

Sean began by questioning Corbett on his justification of moral values in a naturalistic worldview. Sean cited examples from previous statements made by Corbett in class and in public speeches illustrating his reliance on evolutionary processes. Corbett fell flat in his response on all three requirements for an ethical system Sean questioned him on: free will, transcendence, and human value. Perhaps the most frustrating part, for those of us paying attention to the content, was how Corbett falsely insisted on having already answered these questions. He clearly did not. In fact, when Sean demanded an explanation of free will in a naturalistic framework, Corbett stood silent - unable or unwilling to respond.

When it came to Dr. Corbett's chance to cross examine Sean, I wondered if he knew the purpose of this part of the debate. Jim began with two examples of scientific experiments showing human evil as illustrated by a prisoner/jailer study and Stanley Milgram's torture experiment in the 1960's. He said that the human choice to commit evil supported his point that nature explains morality. Then he shifted gears to address an issue he felt unable to respond to in previous sessions on the topic of free will. To be sure Corbett didn't miss his opportunity to capture the intent of the cross-examination period, Dr. Hazen cut in to remind Corbett this was his chance to "keep Sean in the hot seat." So, Corbett asked Sean for a response to his previous statements. Seeing the experiments as more supportive of his own view rather than Corbett's, Sean turned the proposed challenge into agreement with at least two points supportive of his own case; free will and transcendent standard of morality.

The last part before closing statements was audience Q&A with audience-submitted questions read to each debater by the two campus club leaders. Many of the questions were addressed during rebuttals since these were submitted in advance and because the question screeners were in the hall sorting through the cards while some of the issues were being addressed (a note for any of you future debate planners). But the question that came up most frequently for Dr. Corbett was, as one questioner succinctly asked, "Are you certain of your doubt?"

Corbett answered with an equally brief "Yes" followed by an awkward outburst of laughter from the crowd. Sean responded that the question is a good one, in that it shows that while neither of them can be certain, Dr. Corbett doesn't get a free pass just by stating the obvious.

Most questions for Sean related to animal displays of morality, cultural evolution as a grounds for morality, and the incompatibility of hell with God's justice. Sean said animal morality is unlike human morality in that altruism, in the fullest sense, is absent in nature. While animals may "behave" morally, evidence is absent to show the real "intent" behind their actions which underlies the fundamental issue. He added that even if the intent is present, it's hard to rule out their behavior as anything more than the selfish goal of survival of the species. Furthermore, he cautioned that we often unwittingly impose our own built-in concepts of human traits on animals in our observation of them more than we allow their behaviors to show us their real intent. He dismissed hell as a theological doctrine irrelevant to the topic, but stated he could adopt John Stott's view of annihilationism without compromising any ground. Corbett took the opportunity to respond by reiterating earlier points instead of addressing the questions directly.

Neither speaker felt the need to close with a lengthy speech and they both seemed to cut short of the entire five minutes allotted. Sean summarized his case with the contentions and criteria with which he began, pointing out Corbett's failure to rebutt God as the best explanation or to provide an adequate alternative. He ended with a shoulder-shrugged offer that "if someone has a better explanation for moral values, I'll believe it." He left the crowd with plea to examine the scriptures and search for truth. In Corbett's closing, he simply quoted a Fuller Seminary professor who ironically echoed a similar message conveyed by Sean: seek truth and question what you've been told.

The nature of debates always leaves room for ambiguity regarding a winner and rests more on presumed worldviews than an analytical scorecard. I'm in no special place to claim neutrality either - no one truly can - but I think Sean was the more prepared and engaged speaker. But more than that, it was the argument that carried the day. The key moment in the debate was when Corbett tried supporting his point with the sociological experiments demonstrating human evil. The fact that these cases actually give evidence for an objective standard of morality really showed the dominance of Sean's position. This was a moment in the debate I think most of us were expecting. Good moral values such as peace, human survival, and justice in opposition to evil ones like suffering, death, and abuse are as obvious to the human mind as mathematical equations like the square root of 4 equals 2. Corbett is an educated, experienced, thoughtful, articulate, and respectful man who came across a giant brick wall. When you try to deny simple and self evident truths, you will find yourself in contradiction and absurdity every time. This was the case for Dr. Corbett last night.

As a postscipt to this post, it should be noted that none of the speakers were paid last night. The only people profiting from the $5 entry fee are the two professional video producers (who still volunteered some of their time and were paid below market value for the rest). The remaining funds were split evenly by the two campus student clubs. Also, our thanks to Brian Auten of Apologetics 315 for posting the 95-minute audio of the debate almost immediately. The video archive will be available at ConversantLife, and another video including an extra camera angle and Sean's powerpoint will be on YouTube in the next couple weeks.
Posted by Dan at Saturday, February 27, 2010

I can, as an independent person knowing of the debate and listening and watching say that in my opinion, Mr. Corbett was not at all prepared, either in practice, or truly addressing the topic, or in even basic techniques of argument and response. I do have some disagreements with the basic topic or concept, and I think "morality" is not equivalent to altruism or many other behaviors. As a teacher, I find it very sad that another very thoughtful Christian teacher commented that he was in favor of Mr. Corbett as a teacher . . . there's got to be some framework there for students to learn, grow and think on their own. "I doubt it" isn't much to go on.

I thought that Sean McDowell did a very good thing is setting out the fact that he wasn't saying that Christians were good, and atheists (along with everyone else) are bad. And yet, that still seems to be the argument that Mr Corbett understood.

Is it, perhaps, that some atheists simply haven't thought about this issue?

Nice post and this fill someone in on helped me alot in my college assignement. Thanks you for your information.