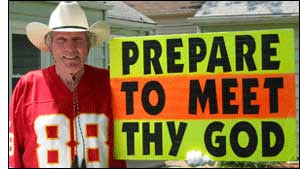 We hear these words all the time, but what do they really mean? Often these adjectives precede or follow a religious term in the case of "radical Muslim" or "Christian fundamentalist." In an interview this week of Muslim turned atheist author Ayaan Hirsi Ali, TV show host Travis Smiley made the statement that Christians commit murder every day. Citing shootings inside post offices and schools, he says "There are so many more examples of Christians, Ayaan, who do that [murder] than you could ever give me of Muslims who have done that inside this country where you live and work" (full video here).

The claim by Smiley seems to be that Christians are responsible for as much violence as Muslims. They say people commit crimes from all religious backgrounds, so the problem isn't religion, but extremism. On the contrary, religion is the center of the problem. Smiley, like Rosie O'Donnell before him make three major errors in reasoning.

#1 - Murder isn't always done in the name of religion

This seems obvious which shows how clouded one's thinking can get when the context is religion. In the PBS interview, Ayaan Ali voiced concern over violent acts committed in accordance with Muslim theology. Smiley responded by offering instances where Christians commit murder such as in post office shootings and the Columbine massacre. Having investigated postal shootings first hand, I know religion is not the driving factor. Smiley seems to have missed or ignored Ali's criticism of Islam as the religion itself being the primary motivating factor behind acts of violence. Like all humans, Christians are capable of horrible things, but religion has little if anything to do with it unless we have evidence otherwise. Muslims kill for non-religious reasons too, but Ali wasn't referring to crimes committed by people who also happen to be Muslim. So why even bring these non-religious murders into the conversation. Just because most people affiliate themselves with Christianity in our country doesn't mean religion motivates the crimes that happen here. Smiley's response was irrelevant.

#2 - All Religions Aren't the Same

It has been exhaustively argued that Muslims who murder in the name of Allah are behaving consistently with the teachings of Muhammad (see article "Islam: Religion of Peace?" by Aaron Brake). But what about those who claim murder is consistent with the teachings of Christ? This is where we need clarity in what it means to be a Muslim or a Christian. As much as liberals like Smiley and O'Donnell cringe at the thought, religions of the world are at odds with each other. Christianity and Islam have conflicting claims so they can't both be right. This means when we say one is right, we say the other is wrong. And it's not just about what we call the place of worship or how leaders dress. The very nature of God and the way to eternal life stand in direct contradiction. Our pluralistic culture can lead people to the false idea that religious traditions are all inherently good except when radical fundamental extremists take things too far. But such thinking places too much attention on words like "extremist, fundamentalist, and radical" while distracting from what each religion really teaches. It's the subject of the extremism we need to be concerned with, not extremism by itself. In the case of Christianity, no one is worried about the extreme feeding of the poor or radically caring for orphans. It's much more difficult to remain peaceful while obeying Surra 9:5 of the Qu'ran which commands to "kill the polytheists wherever you find them and capture them and besiege them and sit in wait for them at every place of ambush." Ali was arguing that Islam is a religion of violence and Smiley's expectation that all religions have the same basic good teachings seems intent on bringing Christianity to the same level at any cost. Smiley and O'Donnell imply that because a murderer claims to believe in Christianity, they're doing it because the Bible told them to it. But this surely doesn't follow.

No one can deny that Christians are capable of evil acts. But what leads Smiley to assume that murderers who claim to be Christians are actually following the teachings of Christ? It appears he thinks they were Christians merely because they claimed it. That is not what the Bible teaches (see Biblical Faith part 1, part 2). Only in today's view of religious belief can we claim to be whatever we want regardless of what we actually are. To show the absurdity of this view, imagine if I jumped off the roof of my house claiming to be a bird. I would suddenly be faced with a conflict between my belief and harsh reality. Yet this is strangely not the case when it comes to religious claims. The difference is that Muslims, who kill in the name of Allah, do so with support from the Qur'ran. Simply put, the violence Ali was referring to was because of religion, but the examples Smiley gave of Christians were done despite of it.

The dialogue between Ali and Smiley was fascinating in that I found myself in the atheist's corner more than that of liberal Christian. While I don't agree with much of Ali's reasoning, she can tell there is something special about Christianity that Islam is missing. Where both Ali and Smiley fail is in their hope for "moderate" religion. They seem to blame radicals on both sides but miss the fact that the amount of passion behind the faith isn't the issue as much as the faith itself. Radical, fundamental, and extremist are inappropriate terms to describe violent behavior. Rather it's the object directing the violent behavior that we're concerned with. Islam and Christianity have very different values leading to different motivations of their followers. While the Qu'ran promotes some good moral values, we cannot ignore it's own law of abrogation and life of Muhammad which clearly demand violent action. Either someone is a follower of Muhammad or not. Likewise, they are either a disciple of Christ or not. There is no such thing as moderately following or extremely following. When a government scientist mailed anthrax letters, we didn't call him a scientific extremist. And we don't call Bernie Madoff a financial radical for defrauding investors of their life savings. Why then do we call murderers "extreme" when they are simply following the teachings of their religion? Violence can be consistent with Islam, but they cannot be consistent with the teachings of Christ. So next time someone shoots up a school or post office, you shouldn't look to see if they ever attended Sunday school to see if they were a Christian. Anyone can claim to be a Christian, but it's always decided by action. As Jesus himself said, "by their fruit, you will recognize them" (Matthew 7:16).
Posted by Dan at Saturday, May 29, 2010