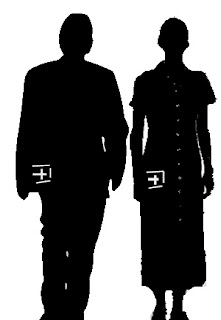 In evangelism, the approach matters at least as much as the content. It's not just what we say but how we say it that determines our effectiveness. Many Christians shudder when called to defend the faith even when acting so boldly in our training or online debates. Like an "expert" shower-singer challenged to take the stage, we need to be ready to put our practice to the test. Fortunately, most people find it easier to obtain the right tactic than master enough knowledge for every situation. That's good news since a less educated winsome manner comes across better
than a rude intellectualism.


Reflecting on a recent encounter lead me to investigate a biblical approach. While the following account involves Jehovah's Witnesses, the same general guidelines apply to any gospel outreach. In my assessment of the dialogue, I've identified four key phases of biblical evangelism which I will mention along the way and list out at the end.
Returning from a jog the other day I noticed a team of Jehovah's Witnesses canvassing my neighborhood. For all the wrong reasons it's always the wrong time when the knock comes at my door. So I decided to seize the opportunity by approaching them on my terms. I've always prayed for God to prepare me to make an impact on people and it occurred to me this was one of those times (Phase 1: Prayerfully Watch).

After an eight mile jog and a toddler-filled stroller, I changed course in the direction of a well-dressed married couple Frank and Sheila (Phase 2: Engage). "What brings you out this fine day?" I inquired. Frank, a middle-aged former Roman Catholic, carried most the conversation as we walked the sidewalk with Sheila following close behind listening carefully and offering the occasional soft-spoken supplement to Frank's points. He started by telling me how they "were out sharing the truth about Jesus." What a wonderful place to start, I thought. So I took Frank up on his offer and asked if we could take a short walk together.

I said it's a worthy question to ask whether biblical claims are true (Phase 3: Reflect). After exchanging evidences for biblical reliability, it seemed we both held a high view of Scripture. So I wondered why they would want to spend their day sharing the "truth of Jesus" with classical Christians like me when their view is virtually the same? So I bluntly asked them to tell me the difference.

At first, they explained how only 144,000 of the saints enter heaven but that the rest of us will experience life on a renewed earth. They said my questions would be answered in more detail if I attended one of their Bible studies. I listened as Frank thumbed through his New World Translation Bible reading selected proof-texts to support this view. My questions about the contextual relevance of those verses (Psalm, Isaiah, and Revelation) caused Frank to rethink his use of them. I didn't push very hard since I sensed there were bigger differences to come. But when they didn't come, I chose to press them a bit (Phase 3: Discern).

I looked at Frank then Sheila and said, "We've been talking for a while so by now you can see I'm not going to get angry if you bring up something to which I disagree. If the basics of protestant Christianity are inaccurate, then there could be a lot at stake for me and others who share my view. Let me give you an illustration. There are many kinds of cancer, right? If a doctor told me I had cancer, I would want to know exactly what kind it was. 'Where in my body was the cancer?' 'To which stage has it progressed?' and 'How long do I have to live?' are the first questions that come to mind. A doctor who wouldn't clarify these things for me but instead tells me it's the same as all the other kinds of cancer, would not be serving my best interests. So please, shoot straight and tell me what's wrong with the belief that Jesus is the second person of a triune God who took upon himself the sin of those who trust in Him so that they stand blameless; welcomed into the eternal Kingdom of God?"

Without hesitation, Frank resumed as if he’d never stopped. "Jesus isn't God, but was created by Jehovah as the first of all creation," he answered. I was relieved yet horrified at the same time. Relieved that the focal point where we should have started was finally revealed. Horrified in anticipation of the task ahead. I began citing Scripture that seem clear about Christ's claims to deity. I pointed to the "Son of Man" title He used of Himself and examples of Jesus' divine deeds and statement such as forgiving sins and speaking on His own divine authority. These, I added, resulted in charges of blasphemy by the Jewish leaders who sought his death. I told of the "I am" reference in John 8 as well as the response to the rich young ruler in Mark 10 where Jesus said "Why do you call Me good? No one is good except God alone." I asked Frank and Sheila if they thought Jesus was a good teacher as the rich man accused Him of. If He was good then He was claiming to be God. I could have continued, but didn't want to abuse their patience.

For the first time in our conversation, Frank and Sheila stood silent. I don't presume to think I changed their minds that day. Maybe I barraged them with too much at once and overwhelmed them. Perhaps they were silent because they weren't getting their message through to me. Or maybe, hopefully, they were thoughtfully considering some of the things I said. I can’t know for sure. Before parting, I reminded them that much was discussed and that we both had much to think about. I asked for a way to contact them so Frank pulled out a few publications and wrote his phone number on one of them (Phase 4: Follow through). I have yet to contact him since that day but hope to do so soon.

As a recap, here are the four phases we went through with Frank and Sheila along with their biblical and pragmatic justification:

#1 Watch:
Pray that you will be used by God to introduce more people to Him. With salvation in Him comes responsibility. Not only prepare yourself but be keen to opportunities that may arise when you don't expect them. And pray for the ability to let God speak through you as he has promised He will (Luke 12:12, Matt 28:20, Isa 21:8)
#2 Engage:
Make the move. No one likes to go out of their way and spend extra time, but Christians are tasked with a greater calling. If you don't approach people who God leads you to, maybe no one will. When you do, ask questions. This serves the two-fold purpose of clarification and instruction. Jesus' used questions in counteless encounters as teaching points. Be sure to pay careful attention to responses and reflect on their perspection and reasoning. In Acts 3:6, we see Peter relate with the need of the crippled begger. Paul's sums up an effective missionary: "I have become all things to all people so that by all possible means I might save some" (1 Cor 20:22b). It's wise to relate to the world others find themselves in.

#3 Discern
In every conversation there will come a point where you must decide whether to press on, change the topic, or end the discussion. No conversation lasts forever. The nature of evangelism is so incredibly important that it shouldn't be given up easily. But no one can control how the other party receives your interaction. I was very fortunate that Frank and Sheila were kind and respectful. Religious topics can become very heated because of short tempers or emotional hot spots. Always be prepared to end the conversation if the other person demonstrates repeated disinterest or refuses to consider sound reasoning. Continuing an unwelcome dialogue can do more harm than good and it wastes God's valuable resource - you. Jesus himself instructed his first disciples to enter homes and towns where welcomed while guaranteeing some will reject them.

#4 Follow through
Don't expect every encounter will end with hand-in-hand prayer. Big change takes time and your job isn't to convince but to represent God well while the Holy Spirit does the heavy lifting. Nonetheless it's important to finish what you started. If you don't care about people, then you won't be a good evangelist. Sincere caring will lead you to see how your ideas were considered and maybe to address issues that you couldn't readily answer at the moment. Let's again look to Paul's example here. The apostle traveled widely around the mediteranian world planting churches as he went, but he didn't stop there. He sent others to assist in teaching the new Christians a greater understanding of God's truth. Paul reflected greatly on these churches he helped to plant as can be seen in the many letters he wrote to them. Many of the letters show concern and continued instruction in theology to help them in their understanding. Other times he passionately scolds them. In others he reminds them that he was just like them and understands what they're going through. If we're serious, we should do no less.

There are many useful resources out there to prepare you to share your faith. One I recommend is Just Walk Across the Room by Willow Creek pastor Bill Hybels. For reaching Mormons or Jehovah's Witnesses, a great free resource to address the biggest problems within each system written by New Testament historian Dr. Michael Licona is Behold, I Stand at the Door and Knock: what to say to Jehovah's Witnesses when they knock on your door. A timely contribution is a $1.99 audio posted yesterday by Harvest apologist Lenny Esposito Help! There's a Cultist at my Door!
Posted by Dan at Friday, March 16, 2012