Reflections on My Recent Debate 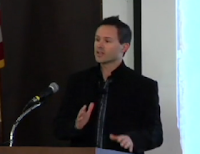 My recent debate with James Corbett on the topic, "Is God the Best Explanation for Moral Values?", has generated quite a stir. A number of people from various backgrounds and beliefs have chimed in with their thoughts, including a popular atheist blogger, a Christian science-fiction writer, a Christian postmodernist, the "Apologetics Junkie," and the Saddleback College paper (the debate was held at Saddleback College).

Here are a few of my thoughts:

Last November I sat down with my friend Greg Koukl while we were both at a conference in New Orleans to talk about his (then) pending debate with Michael Shermer. Greg gave me lots of helpful advice, but one quote stuck out to me in particular: “The more you sweat in preparation, the less you bleed in battle.” Given that my first debate was going to be on my home turf—in front of my family, friends, students, and colleagues—I most definitely did not want to bleed in battle.

So I prepared hard for about four months by watching debates, reading books, talking with my former professors, and even having multiple practice debates with friends of mine. I’ve probably never prepared for something harder in my life. While I have been a public speaker for over a decade, this was my first official debate. I learned very quickly that speaking skills help in debate, but they are only one component.

Debates are also quite stressful! Knowing the debate was being simulcast live over the Internet to thousands of people, knowing that it would eventually be posted on YouTube, and also considering the experience Dr. Corbett has as a teacher, only added to the pressure.

How did I deal with it? My preparation was key. One of my former Talbot professors, Doug Geivett, encouraged me to trust my training. As many of you know, I earned an MA in Philosophy and an MA in Theology from Talbot in 2003. I went into the debate as prepared as I could have been. I knew that even if I didn’t perform well, I had truly done my best and could live with that.

C.S. Lewis’ advice also came in handy. In new social settings Lewis said it’s natural to feel uncomfortable. But if you choose to go speak to people and choose to be interested in what they say, then often the social awkwardness dissipates. I chose to smile before and during the debate, met people before the debate (including some on the other side), and to relish the moment. I even met one outspoken atheist named Mark who was giving me pointers before the debate!

One of the curses of debating is that hindsight is 20/20. As soon as the debate was over I found myself saying, “I should have said…” But here are a few that stand out to me.

First, during the cross-examination and Q&A period, Dr. Corbett argued that Stalin and Hitler had terrible backgrounds and could not have done differently (even though, oddly, he had already conceded that he believes in free will). In other words, choices are determined by environmental factors. But if this is true, then why would we hold Hitler and Stalin accountable? Why be upset with them? They couldn’t have done differently! After all, we don’t get upset with a soda when it explodes because the soda has no free will. We may be upset that our clothes get wet, but we don’t hold the soda responsible. The same should be true with Hitler and Stalin. But I doubt my opponent really believes that.

Second, much of Corbett’s case involved two things: (1) We should doubt and not hold things too firmly; and (2) people who believe in God, and have certainty that they’ve heard from God, are more likely to do horrendous evils. Believe it or not, I already had two stories planned to share in my closing remarks that countered both of these. But I forgot!

One story was about how, in an emotional moment, Mother Theresa reached out and hugged a leper in Calcutta. A passerby said, “I would not do that for all the money in the world.” Mother Theresa replied, “Neither would I. I did it for the love of Christ.” In other words, she was firmly convinced that people were made in God’s image and had dignity and respect, regardless of their appearance, and ought to be treated lovingly. She fought poverty not because she doubted, but because of her firm convictions that humans are valuable. The same is true for William Wilberforce. He spent his life fighting slavery not because he doubted, but because of his firm convictions that God created people to be free.

Sure, some people have had firm false beliefs about God and have caused harm because of them. This is undeniable. But this only shows that our psychological convictions are not enough—we must also seek to have true, reasonable beliefs. Corbett is right that doubt is important, even though I think he overemphasizes it. (Side note: it saddens me how often we Christians condemn doubt. If we really have truth, then what are we afraid of? Doubt is a part of life and can be a powerful vehicle driving people to find truth.) But there are in fact certain things we should not doubt such as the immorality of rape, the intrinsic value of human beings, and the immorality of slavery. And there are some things we should doubt at times—namely our own doubts! The purpose of doubt is to arrive at the truth. Otherwise, what good is doubt? And there may come a time when our doubts genuinely dissolve because we have solid reasons for our beliefs.

Overall, I feel good about the debate and am excited to eventually have another one. I am beginning my Ph.D. work this week, so I’m not sure when I will have the time. But if the right opportunity arises, I just might jump at it!

My thanks to the students from the Freethinkers and Campus Crusade for Christ at Saddleback who helped sponsor the debate. And also Karla, the Saddleback faculty advisor, and Dan Grossenbach for all their preparation. And thanks to Jim for agreeing to participate. It was a lively evening—one I will never forget.
Posted by Aaron at Wednesday, March 03, 2010