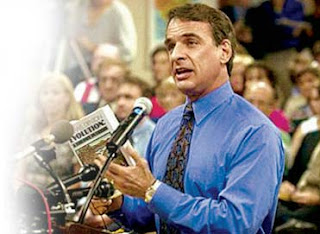 A number of years ago, two books appeared that sent shock waves through the American educational community. The first of these, Cultural Literacy: What Every American Needs to Know, by E.D. Hirsch, documented the fact that large numbers of American college students do not have the basic background knowledge to understand the front page of a newspaper or to act responsibly as a citizen. For example, a quarter of the students in a recent survey thought Franklin D. Roosevelt was president during the Vietnam War. Two-thirds did not know when the Civil War occurred. One-third thought Columbus discovered the New World sometime after 1750. In a recent survey at California State University at Fullerton, over half the students could not identify Chaucer or Dante. Ninety percent did not know who Alexander Hamilton was, despite the fact that his picture is on every ten dollar bill.

These statistics would be funny if they weren't so alarming. What has happened to our schools that they should be producing such dreadfully ignorant people? Alan Bloom, who was an eminent educator at the University of Chicago and the author of the second book I referred to above, argued in his The Closing of the American Mind. that behind the current educational malaise lies the universal conviction of students that all truth is relative and, therefore, that truth is not worth pursuing. Bloom writes,

There is one thing a professor can be absolutely certain of: almost every student entering the university believes, or says he believes, that truth is relative. If this belief is put to the test, one can count on the students' reaction: they will be uncomprehending. That anyone should regard the proposition as not self-evident astonishes them, as though he were calling into question 2 + 2 = 4. These are things you don't think about. . . . That it is a moral issue for students is revealed by the character of their response when challenged—a combination of disbelief and indignation: "Are you an absolutist?," the only alternative they know, uttered in the same tone as . . . "Do you really believe in witches?" This latter leads into the indignation, for someone who believes in witches might well be a witch-hunter or a Salem judge. The danger they have been taught to fear from absolutism is not error but intolerance. Relativism is necessary to openness; and this is the virtue, the only virtue, which all primary education for more than fifty years has dedicated itself to inculcating. Openness—and the relativism that makes it the only plausible stance in the face of various claims to truth and various ways of life and kinds of human beings—is the great insight of our times. . . . The study of history and of culture teaches that all the world was mad in the past; men always thought they were right, and that led to wars, persecutions, slavery, xenophobia, racism, and chauvinism. The point is not to correct the mistakes and really be right; rather it is not to think you are right at all.1

Since there is no absolute truth, since everything is relative, the purpose of an education is not to learn truth or master facts—rather it is merely to acquire a skill so that one can go out and obtain wealth, power, and fame. Truth has become irrelevant.

Now, of course, this sort of relativistic attitude toward truth is antithetical to the Christian worldview. For as Christians we believe that all truth is God's truth, that God has revealed to us the truth, both in His Word and in Him who said, "I am the Truth." The Christian, therefore, can never look on the truth with apathy or disdain. Rather, he cherishes and treasures the truth as a reflection of God Himself. Nor does his commitment to truth make the Christian intolerant, as Bloom's students erroneously inferred; on the contrary, the very concept of tolerance entails that one does not agree with that which one tolerates. The Christian is committed to both truth and tolerance, for he believes in Him who said not only, "I am the Truth," but also, "Love your enemies."

Now at the time that these books were released, I was teaching in the Religious Studies department at a Christian liberal arts college. So I began to wonder: how much have Christian students been infected with the attitude that Bloom describes? How would my own students fare on one of E.D. Hirsch's tests? Well, how would they? I thought. Why not give them such a quiz?