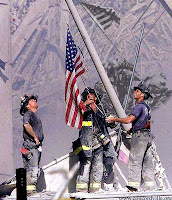 During this time of the year I am always saddened in remembering the lives lost on September 11, 2001, and in hearing the stories of those who lost loved ones on that fateful day.

At the same time, I am always surprised to see the resurgence of conspiracy theories which say that 9/11 was the work of the government, the collapse of the twin towers was the result of a controlled demolition, and Elvis is alive and well in Tennessee.

My brother-in-law recently wrote me an e-mail asking me what I thought about some of these internet movies that thrive on the conspiracy theory motif. One of the best known is probably Zeitgeist, though there are others out there which focus more on 9/11.

As a side note, last week on the blog I re-posted an article by Greg Koukl of Stand to Reason entitled "Jesus, the Recycled Redeemer" in three parts, which you can read here if you are so inclined: part 1, part 2, part 3. The reason I mention this is because the first part of Zeitgeist makes the claim that Jesus was simply a mythical figure like other pagan gods with nothing unique about Him or His story.

However, the film also goes on to briefly cover the 9/11 attacks. It claims the government was involved and that the collapse of the twin towers was the result of a controlled demolition as opposed to the the airplanes crashing into them. Essentially, Bush lied and people died.

As I told my brother-in-law, I am skeptical about conspiracy theories for at least two reasons. Here's why.

I'M SKEPTICAL, HOW BOUT YOU?

Reason #1: The first reason to be skeptical about conspiracy theories is that they almost always turn out to be non-falsifiable. In other words, you can never prove them wrong! This does not necessarily mean that they are wrong simply because they are non-falsifiable, but it raises suspicion as to how much credence we should give them given the fact there is no way to know if they are mistaken.

This became abundantly clear to me in a conversation I had with a fellow co-worker who, incidentally, turned out to be a conspiracy theorist. After providing my friend with objections, arguments, and counter-evidence which devastated his theory, he simply replied, "Ah yes...but you see...that is what they want you to believe!"

Herein lies the rub: anytime someone proposes a conspiracy theory and you are able to provide evidence and arguments which shows they are actually wrong, the hard-core conspiracy theorist will always reply, "Ah yes...but you see...that is what they want you to believe!"

So in effect, the conspiracy theorist takes whatever evidence and arguments you provide and somehow twists them into evidence and arguments for his own position! It doesn't matter what you say because the facts will always somehow be worked into their conspiracy in order to fit their preconceived belief. Quite clever...and yet at the same time intellectually dishonest. This in turn makes it impossible to ever prove them wrong, making their theory non-falsifiable.

Reason #2: The second reason to be skeptical about conspiracy theories is that they just don't seem to work. Think about the Watergate cover-up during the Nixon Presidency. Here we had the most powerful men in the world and they could not keep a conspiracy together for more than two weeks after Nixon was informed by John Dean about what was really going on. Of course, if you mention this to a conspiracy theorist he will say that Watergate was supposed to be discovered because this was all part of the grander conspiracy. A little too convenient if you ask me.

Despite the example of Watergate, conspiracy theorists would have us believe that there are national and global conspiracies going on right under our noses. All the while nobody is talking and no information from reliable sources is made known publicly on a grand scale. Call me crazy, but I don't buy it. People like to believe conspiracy theories because they are fun to think about and the like, but at least for me personally I am going to need a bit more than that.

So what about 9/11? Was the collapse of the twin towers a result of the plane crashes or the work of a government controlled demolition?

First, just stop and think for a moment what would have to be true if the conspiracy theorists are right. What the conspiracy theorist must say is that thousands of pounds of explosives were somehow marched into the twin towers prior to 9/11 and put precisely in place for a controlled demolition. Of course, not a single eyewitness ever reported men in black suits carrying thousands of pounds of C-4 and attaching it to the structures. Do you know how long that would have taken? Do you know the amount of time it takes demolition crews to set up an intended demolition of a building and the amount of precision it takes? Yet apparently, according to conspiracy theorists, all of this took place without a single eyewitness reporting these strange events. This seems hard to believe considering the twin towers were already under close scrutiny because of prior attacks.

Again, we are to believe a giant conspiracy must have taken place right under everyone's noses with no eyewitnesses. These theories, sooner or later, become absurd. The burden of proof is clearly on the those making the claim to produce some evidence for their position.

Second, Larry Schweikart, author of the book 48 Liberal Lies About American History, has this to say regarding the collapse of the towers:

The editors of the blue-collar magazine Popular Mechanics joined the fray by reviewing some of the conspiracy books before publishing Debunking 9/11 Myths in 2006. The airplanes carried some ten thousand gallons of jet fuel each. Jet fuel burns at 1,100 to 1,200 degrees Celsius, and steel doesn't melt until it reaches 1,510 degrees. But it loses strength at 400 degrees Celsius, and at 980 degrees, it possesses less than 10 percent of its strength. Load-bearing columns and beams did not need to melt: they only had to be weakened and bent sufficiently. The National Institute of Science and Technology (NIST) conducted a study of the buildings' collapse and found that the impact had stripped "fireproofing insulation from the trusses that supported 80,000 square feet of floor space." As floors began to sag, they put additional stress on the 90 percent weakened steel columns, pulling them inward and adding to the stress on surviving columns. None of this even begins to take into consideration the phenomenal impact stresses of a jetliner striking the buildings at over 150 miles per hour, or the "hollowing out" of the load-bearing elevator shafts by the fuel and fire that shot down them.(1)

The fact that some conspiracists actually hold respectable jobs or appear normal under other circumstances should not conceal the fact that they are on one side, and the American Society of Civil Engineers, the National Fire Protection Association, Underwriters Laboratories, several prominent universities, the 9/11 Commission, plus virtually every agency within the government that has in any way examined the evidence, are on the other side.(2)

When dealing with conspiracy theories it is important to keep several things in mind:

First, check your information sources. Are they reliable? What are their credentials? Do they have authority to speak on the matter?

Second, look at both sides of the issue. Examine the arguments and weigh the evidence. Try to be as objective as possible.

Third, ask good questions. When conversing with a conspiracy theorist look for problems in the theory and ask questions that may expose these flaws.

Fourth, keep an open mind. You never know...I may just be part of the conspiracy.

Good case. I was at the barber shop yesterday and sure enough, on the radio was an interview with a conspiracy theorist. The barber was starting to buy into it... I asked some questions to test the theory and he realized that if you actually start to carry the conspiracy to its conclusion, it just doesn't work.

Thanks so much for the comment. Just be careful not to argue with your barber while he is cutting your hair! : )