Guilty but "Not Guilty" 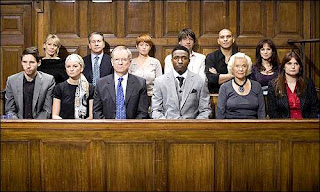 Many were outraged this week when an Orlando jury found Casey Anthony not guilty of her young daughter’s murder. But why? Twelve people just like you and me prescreened by both the prosecution and defense were there for every minute of the trial. They were the only audience the lawyers cared about. Everything was thrown at them; every piece of evidence and every defense. Regardless of what we all saw in the media, they saw more and analyzed it more. At least one juror has spoken out implying that the cause of death was indeterminate so blaming someone for an unknown action leading to the death leaves a logical gap. In other words, it’s certain Caylee died, but not that she was murdered. If “murder” itself is uncertain, assigning blame to it would have been as well. Certainty is what was missing. Was certainty neccessary?


Admittedly, I watched almost no coverage of the trial or media commentary. But from my experience in criminal investigations, I understand what a standard of proof is. The jurors were operating on the highest standard in our legal system: beyond a reasonable doubt. So, the question is, can the jurors know that Casey Anthony killed her daughter yet still find her “not guilty” in a criminal trial? I think many of them did exactly that. To see this, we must understand two things: 1) what is knowledge and 2) what standard of proof is accepted in court.
What does it mean to “know” something? When approaching any given proposition, we start by judging it to be either true or false with our built in bias, given background knowledge, and the facts provided. When someone believes something is no more likely true than untrue, they suspend judgement by maintaining an agnostic position. However, we usually develop beliefs in most things that are worth reflecting on. As one becomes aware of evidence or reasons for or against a proposition, the decision scale tips toward one direction or the other forming a “belief” in its truthfulness or falsehood. Mere belief grows into actual knowledge when there is good reason behind those beliefs. One could say they have a belief about something without proper justification. For example, my former graduate school professor J.P. Moreland likes to say he believes the Kansas City Chiefs will win the Superbowl next season, but concedes he doesn’t know they will. Knowing something is not only a belief but one that is justified by reasons or evidence. Knowledge, as Dr. Moreland defines it, is “justified true belief.” In the case of belief, we can propose just about anything. However, if he were to claim to know that the Chiefs are scheduled to play the Buffalo Bills for their opening home game because he saw their schedule last night on ESPN, it would be knowledge based on a justified true belief. Another point of clarity is that knowing something intellectually is different than knowing in the sense of emotional or psychological certainty. These are two different uses of the term altogether. Moreland can say “I just know the Chiefs are going to win the game!” but that psychological confidence doesn’t translate to objectively knowing anything about the future outcome of the game. Reality confirms our beliefs but it exists independent from them.


To illustrate how our knowledge plays out in practical terms, consider the following scenario. When you board a plane, you must have knowledge of several propositions. For instance, the pilot is adequately trained and is of clear mind, that the plane has been recently inspected, that the control tower will keep other planes at a safe distance from each other, and security screened out any potential terrorist threats. The conviction is more than belief because the beliefs are justified and account as knowledge. I don’t know about you, but in my travels, I’ve had sufficient reasons for believing these things. The pilots appeared confident and of right mind. Moreover, I assumed the flight crew members were aware of the pilots’ competence as well as the plane’s mechanical integrity since their lives were at stake too. I witnessed the security procedures myself which seemed sufficient from what I could see. I figured the airline company was motivated to ensure safety as well since any accident due to poor maintenance or pilot incompetence would be a public relations nightmare among other things. Do I know “beyond a reasonable doubt” that none of these assumptions can possibly be false? If just one of them is false, all of us on board could die. With life and limb quite literally on the line, should I get off the plane until that high standard can be met? While those with a prior fear of flying may think so, the reasonable answer for most of us who travel is a clear “no.” Whether it’s eating food or crossing the street, we just don’t make decisions based on such a standard in everyday life. Our knowledge of the world doesn’t require it. Otherwise, if beliefs only counted as knowledge when there is no possibility of being wrong, the truth of any belief would be ever evasive. But it gets even stranger. As soon as skepticism stamps out our confidence in knowledge, the tides turn quickly. If we grant the skeptic that we cannot know anything, we must wonder if their claim itself is exempt from their own theory. The more one says knowledge is impossible the more one is refuting his own theory. If he's consistent, the skeptic can't be certain his position is the right one.
So why does the legal profession, specifically criminal convictions, hold to such a high epistemological standard? It’s for one reason. Our society values mercy over justice so the criminal justice system reflects that principle. As hard as it is to see played out in cases like these, I agree with this value judgement. Both mercy and justice are important, but the wrongful conviction of an innocent man is deemed by our culture to be a greater evil than the good that comes from rightfully condemning a guilty man. So when we talk about whether or not we can know Casey Anthony killed her little girl, we must remove ourselves from the justice system vacuum the jurors found themselves in. In fact, I believe it was possible for every single juror on that case to know Casey was guilty of murder but were bound by the rules of judicial procedure to issue the vote of “not guilty.” This was not a vote of their knowledge or even their psychological confidence, but a vote on whether the high standard was met beyond a reasonable doubt.
To see how different the world inside a criminal courtroom is compared to anywhere outside of it, consider this. In my criminal investigations, I often come across a case like the following example. Imagine two individuals were caught red-handed with 20 pounds of drugs. The patrol officer stopped the vehicle the suspects were driving for running a red light. The officer was fair to the suspects and thorough in his investigation which led him to believe the suspects were possessing and transporting illegal drugs in an amount normally intended for sale. When he read the suspects their constitutional right not to make any self-incriminating statements, both decided not to speak so no admissions were made. Nonetheless, the officer met the standard of proof for his part of the case, “probable cause,” which is necessary for the arrest and search of the suspects. Probable cause is similar to our definition of belief above where the facts need only appear more true than not. However, the burden is much greater for the prosecutor. If I bring this case to the United States Attorney for federal prosecution, they may be fully within their rights to decline the case. Despite what the officer discovered and what we all know is true, the case will be dismissed and the suspects released from custody. But why? Don’t we have knowledge that they committed the crime? Of course we do, but the courtroom operates within a set of rules regardless of what we actually know. If just one procedure was missed, if the amount of drugs didn’t meet prosecutorial guidelines, if key witnesses aren’t willing to testify in court, or if the evidence isn’t “beyond a reasonable doubt,” the case won’t even be accepted for prosecution no matter how justified the initial arrest by the patrol officer was or how obvious their guilt. The prosecutor knows that the case could end up before a jury who decide on more than intellectual knowledge that the defendant is guilty, but that no alternative theory is even reasonable. That’s why it’s unfair to ridicule the jurors in the Anthony trial. Sure, they might have been wrong. Perhaps the high standard was met. But whether or not they properly applied the standard is irrelevant to whether they know Casey killed Caylee. They can know she’s guilty even when they voted otherwise in court.
Posted by Dan at Saturday, July 09, 2011