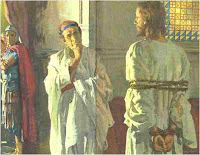 "What is truth?" Pontius Pilate wasn't the first to ask this.

Historically, there have been three dominant theories of truth put forth by philosophers:1

First, there is the pragmatic theory of truth: truth is what works. Three major problems with this view are as follows:

Second, there is the coherence theory of truth: truth is logical consistency (coherence) among a set of beliefs an individual holds. Three major problems with this view are as follows:

Problem #1: this view implies that contradictory propositions can be true. On this view, it is possible for two different people to hold contradictory beliefs yet both beliefs to be "true" as long as these beliefs cohere with each individuals web of belief respectively. This leads to the absurd notion that contradictions can both be true.

Problem #2: for the same reasons as problem #1, and like the pragmatic view, this view implies relativism. On the coherence view, what is true is relative to each individual's belief system. Two contradictory beliefs may both be "true" as long as they cohere with their respective systems. But relativism is false, therefore like the pragmatic view the coherence theory must be rejected.

Problem #3: this view, like the pragmatic view, seems counter intuitive. The reason is that the coherence theory cuts the knower off from the real world. What is true is not what matches reality but rather what coheres within a given system of belief. But most people intuitively understand that truth has something to do with the way the world  really is.

Coherence is important, but not enough. It is a necessary condition for truth, but by itself it is not a sufficient one.

Finally, there is the correspondence theory of truth: truth is when an idea, belief, or statement matches (or corresponds with) the way the world actually is (reality).

This may rightly be labeled the "common sense" view of truth. While not taught explicitly in Scripture, it is assumed throughout both the Old and New Testaments. The correspondence theory of truth states that an idea, belief, or statement is true if it matches, or corresponds with, reality. In this sense, reality is the truth-maker and the idea, belief, or statement, is the truth-bearer. When the truth-bearer (an idea) matches the truth-maker (reality) they are said to stand in an “appropriate correspondence relationship” and truth obtains.2 Consider the following statements:


1. Barack Obama is the current President of the United States.

2. The city of Los Angeles is located in California.

3. Abortion takes the life of an innocent human being.

Are these statements true? They are if in fact they match reality. Statement number 1 is true if in reality Barack Obama is the current President of the United States. Statement 2 is true if in fact the city of Los Angeles is located in California. And statement 3 is true if abortion really does take the life of an innocent  human being. Easy enough, right? Aristotle put it this way:

A Case for Correspondence

Christian philosopher J.P. Moreland notes two main arguments which have been advanced in favor of the correspondence theory of truth: the descriptive and the dialectical.4

The descriptive argument simply presents specific cases which help illustrate the concept of truth. For example, in Moreland’s bookstore case, an individual named Joe has the thought “Richard Swinburne’s book The Evolution of the Soul is in the bookstore.” When Joe enters the bookstore and sees the book he actually experiences truth, a correspondence relation between his thought and reality. Again, this is the “common sense” definition of truth since it is the view we all presuppose in our daily actions and speech, i.e., everyone assumes the correspondence theory of truth when reading a medicine label or dialing a phone number.5 This leads to the second argument.

The dialectical argument asserts that those who deny the correspondence theory of truth or present alternative theories actually presuppose the very thing they reject, showing the self-defeating nature and incoherence of their alternative view. Moreland presents this argument in the form of a dilemma:

In other words, either a purposed view of truth corresponds to reality or it does not. If it does, the arguer presupposes the correspondence view, the very thing he rejects when arguing for an alternative view. On the other hand, if a purposed view does not correspond to reality then we have no reason to accept it.

In short, denying the correspondence theory of truth is an implicit admission that one’s view should not be taken seriously, for only a view which matches the way things really are is worthy of our attention and belief. Contrary to the postmodern adage, truth is not "stranger than it used to be." Rather, truth is what we have taken it to be all along and what we assume it to be everyday.

Correspondence and the Christian

Is the correspondence theory of truth optional for Christians? Not according to the apostle Paul:


And if Christ has not been raised, our preaching is useless and so is your faith. More than that, we are then found to be false witnesses about God, for we have testified about God that he raised Christ from the dead (1 Cor. 15:14-15).


Therefore, the correspondence view of truth is not simply one of many options for Christians. It is the only biblically and logically grounded view of truth available and allowable. We neglect or deny it to our peril and disgrace.7

1 The following summaries and critiques are taken from Steven B. Cowan and James S. Spiegel,  The Love of Wisdom: A Christian Introduction to Philosophy (Nashville: B&H, 2009), 35-45.

Email ThisBlogThis!Share to TwitterShare to FacebookShare to Pinterest
Labels: truth

I'm rather struggling to see how Paul is talking about the correspondence theory of truth in that passage...

I think you need to rewrite what you have said a little - saying "Not according to the Apostle Paul" implies that the quote will involve Paul speaking directly about the nature of Truth. I agree with you that Paul assumes a "correspondence theory" (though of course such modern categories would be entirely alien to him) though I think a) you need to do a bit more work to show this and b) Paul's view of truth is much *bigger* than a mere correspondence theory.

Thank you for your comments and I appreciate your feedback.

I think you need to rewrite what you have said a little - saying "Not according to the Apostle Paul" implies that the quote will involve Paul speaking directly about the nature of Truth.

I understand your point, though this is not necessarily true. I think Paul argues that the resurrection corresponds to reality and that if Christ has not been raised (in reality) our faith is useless. In other words, the belief that Christ rose from the dead must correspond with reality according to Paul. Therefore, the correspondence theory of truth is not optional for Christians.

I am glad you agree, and of course I agree with you that Paul would not label his view the "correspondence theory." But I think that is beside the point.

Paul's view here is consistent with his other writings and use of the word "truth." Here is a quick list of verses where I think he assumes correspondence as well:

If you think he is using it in another fashion please point out where exactly.

and b) Paul's view of truth is much *bigger* than a mere correspondence theory.

I am not sure in what sense you mean *bigger,* but you are more than welcome to make your case.

Shall we then say that reality is the sole arbiter of truth? That a unitary immutable reality is alone worthy of our mental fire and viscereal lean?

Then what of the cinema? Or our most personal, vivid and impossible dreams? What of storytelling, music, art works, poetry, or even creative parenting? And what happens to those elusive, happy, unexpected coincidences along rigorous investigative lines of disparate disciplines that lead to insights not before imagined to fill out the scientific lexicon?

Peer closely and broadly at our living reality, not so much into the cleansed artifices of systematic theology. Our future is no time for a new heavens and new earth, nor for gods and kings. Our future longs for a common belief system that surpasses our former understandings, leaves Jesus Christ and Prophet Mohammud (peace be upon their remains) in the dusts of their ages. It strikes boldly into a new and heroic survival story that will redeem the human-centric global mess, choke-gate and crucible, of our late industrial age. I'd wish you could see this less as blasphemy than as bright hope for future living generations.