Folly of the Cross 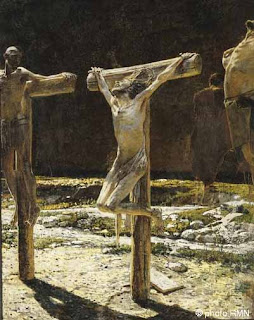 Waiting in the Las Vegas airport for my delayed flight home last night, I finished a short book on the ancient execution method of crucifixion. I read the book after hearing it referenced by a number of top NT scholars, and pulled it out of my library recently in the spirit of the upcoming passion week. I learned many things from Martin Hengel's 90-page book aptly named "Crucifixion" (1977 Fortress Press). The book can be broken down into two primary areas of focus: 1) the history of the cross and 2) how people of the time perceived it.
"Crucifixion" is a well-researched book chock full of examples from ancient literature (despite Hengel's own claim that many writers dared not mention the term because of it's unsavory reputation). But the book's biggest contribution is how it helps the modern reader appreciate Paul's reference to "the folly of the cross."

Hengel brings the reader into the ancient greco-roman world where the crucifixion was a repulsive concept feared more than being burned, skinned, or eaten by animals. The book documents variations of crucifixion throughout the civilized world and over a period of about 700 years. It was known by people of many places, religions, and ethnicities. When the modern reader learns exactly what crucifixion is, one would see how it's hard to ignore. When it came to the setting we find Jesus in, his fellow Jews too were well aware of the cruel penalty paid by their rebellious zealots and considered the crucified to be cursed (Deut 21:22-23).
Set in this context, any message where a crucified man - let alone a peasant galilean Jew - to be revered as the incarnate second person of God, wouldn't have been received well. It is hard to fathom a story harder to sell in 1st century Palestine than the one the apostles suffered to preach (even before mentioning the resurrection - another tough sell). It's also a fact of history no reputable scholar of history denies. That Jesus of Nazareth "took on the form of a slave" (Phil 2:7) to die the most disgraceful, painful, visible, and feared death Rome had to offer - crucifixion.
Posted by Dan at Tuesday, April 19, 2011

Email ThisBlogThis!Share to TwitterShare to FacebookShare to Pinterest
Labels: crucifixion

Stoked to have found this blog. Thanks for the all the efforts behind it, what a blessing.

Thanks for the compliment. We've had a bit of a break but plan to post many new articles. Stay tuned!