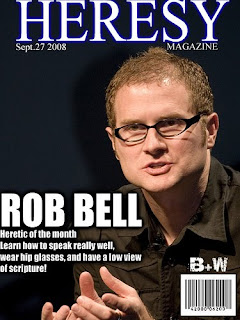 If you think Jesus threatens you with eternal torment unless you believe in him, you’re out of step with traditional Christianity. For those of you critical of this faulty concept, you're in the company of Rob Bell and numerous atheists he seems to agree with on this point. In the promo for his new book, Bell implies that if God is loving, he wouldn’t send people to hell (click here for his two-minute video speech).
As it turns out, this is an objection we usually get from atheists. In December 2009 I was in a panel debate on the topic, “Does the God of the Bible Exist?” where the atheists brought up this very objection. (click here for a five-minute video clip from the debate) For their objection to work, it must be based on: 1) an accurate representation of classical Christianity’s teachings on hell, and 2) a logical flow of thought. I will show it meets neither.
Is Their Hell Biblical?
The view underlying this objection is an inaccurate view of hell which then attacks that view by what’s known as the straw man fallacy. Bell presents a concept different than the gospel message and then makes it look absurd. It seems his unwillingness to accept the traditionally accepted doctrine stems not from scripture, but from his own personal desires. Bell is a seminary educated theologian who should know better. Christian teaching has always been that no one goes to hell for not believing in Jesus. Genesis sets the stage quite clearly by showing us the consequence of human sin is death in both our human bodies and in our relationship with God. For God to be all-loving, he must not allow any evil in his presence. We didn’t deserve to be reconciled back to him, but it was by his grace that Jesus saved us from this man-made consequence. He took upon himself the required penalty that only a divine being can. Far from being the cause of damnation, he is the free cure that none of us deserves. Under this proper understanding of hell, God is punishing those who refuse to accept his free gift through Jesus. Contrast this with Bell’s insistence that hell is unjust punishment for a loving god. But why should a loving god embrace evil and force people to worship him in heaven – even those who refuse to draw close to him? How does Rob Bell know that Gandhi wanted to be with God? Like the atheists, Rob Bell doesn’t give any reasons for his conclusion. He just says it expecting an emotional reaction.
Is Their Case Logical?
Not only does this objection contain an informal fallacy, but it also simply doesn’t follow logically to their intended conclusion – that a good god cannot send people to hell. Even if we would grant Bell and the atheists are correct that a good god can’t send people to hell, there’s still a problem. Denying hell’s reality isn’t the only feasible option. If they are right that a good god can’t send people to hell, the following options are possible: 1) Hell doesn’t exist, 2) God doesn’t exist, 3) Objective goodness doesn’t exist, 4) God isn’t good, or 5) God is good and has morally sufficient reasons for sending people to hell. So why pick number 1 or 2 while ignoring the rest? Is it a loving act to mislead your audience to make your point? When eternal life is at stake, that’s not a loving thing to do.
For purposes of rational thought, the atheists score worse on another point. While Bell is either wrong or irrational, the conclusion drawn by the atheists is also irrelevant and intellectually dishonest. The first challenge from Mark Smith (in the video above) was the only one attempting to show a relevant inconsistency in a benevolent god sending people to hell. Nonetheless, as I showed in the video, this point fails several false and ungrounded assumptions. But the next two objections by Alex - “Hell is unfair” and Bruce - “Hell is too painful” are completely irrelevant to the existence of God. What the atheists dislike has nothing to do with whether the object of their dislike exists or not. Moreover, they’re intellectually dishonest because they think the punishment of hell is what convinces people yet doesn’t even convince them. If the threat of burning were real, why wouldn’t it convince them? This assumption begs the question by assuming hell isn’t real. Someone could say the Surgeon General’s warning of cigarette smoke causing cancer is using fear also, but that doesn’t make the claim any less real. We have to assess claims by their own merits before assuming they’re false.
Conclusion

With few exceptions, the overwhelming majority of classical Christian leaders have consistently taught that God sends to hell those who refuse his grace for morally justifiable reasons (see option #5 above). What are those reasons? God only knows. But those who challenge God’s goodness on the basis of hell need to show it’s absolutely impossible for the contradiction to work. In other words, if it’s even possible for him to have one justifiable reason for hell, then it’s not a contradiction. What’s more, if God is the standard for goodness, he is the basis from which to decide what is justifiable and what is not.
Of course, Rob Bell is not an atheist, but his message can be even more damaging to the cause of Christ. Satan doesn’t depend on black-robed cultists worshiping him in candle-lit basements. He works most efficiently by infiltrating false ideas into the heart of Christian teaching. Rob Bell reaches many people in his message which probably contains some truth. While many aspects of Christian doctrine have room for flexibility (worship styles, baptism methods, tithing amounts, etc), the nature of God as a perfect being who is loving yet intolerant of evil must not be denied or his benevolence is compromised. Ironically, this is the very thing Bell says he doesn’t want to do. More Christians are exposed to Rob Bell than they are to atheist activists and can cause much more damage than most people might have expected. As Greg Koukl succinctly concluded his podcast last week, “Love Wins, but Rob Bell doesn’t.”
Posted by Dan at Sunday, March 27, 2011

Actually I have been following your "Apoligetics 315" blog for a long time.

I really enjoyed reading the posts on your blog. I would like to invite you to come on over to my blog and check it out. God bless, Lloyd

I think you made a mistake in your first sentence. I thought Bell DID teach that people who don't believe in Christ DON'T go the hell? That first line in your essay confused me.
(F.Y.I., for what it's worth)

Thanks, B.N.A.Freedom. It's unfortunate I misworded the intro to the article which understandably led to some confusion. I've rewritten it to clarify my original intent. Thanks for correcting me!

The Bible does not teach eternal punishment. God's love and mercy endures forever. Does﻿ it really endure forever or only in﻿ this life? How﻿ can it be Good News if it doesn't translate to the﻿ afterlife?﻿ God will still judge but He will not punish forever. I invite you to join in at www.whatthehellbook.com

1﻿ Tim. 4:10 This is why we work﻿ hard﻿ and continue to struggle, for our hope is in the living God, who is the﻿ Savior of all people and particularly of all﻿ believers.

@whatthehellbook: The Bible clearly teaches punishment and it seems to lean on the side of eternal punishment. I use the term "punishment" not necessarily equating to literal burning agony, but in the sense that being separate from God and removed from the common grace of this world is terribly unpleasant and a justified consequence of freely rejecting Christ's gracious offer. Obviously you think scripture leans the other way but I humbly suggest there's room for debate on this issue. In addition to scripture, I think you'd agree to the following propositions: 1- God won't force people to accept him (even the eternally unrepentent), and 2- allowing any amount of evil to go unpunished is incompatible with His perfect justice. I encourage people to visit your site and examine the issue themselves.