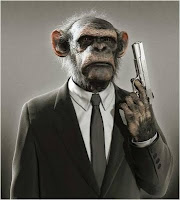 This last Friday Sean McDowell debated Jim Corbett on the topic "Is God the best explanation for moral values?" If you have not listened to the debate you can download the audio here:

Sean's contention during the debate was that God is in fact the best explanation for moral values. If there is no God there is no moral law-giver and hence no transcendent moral law which we can appeal to. In other words, without God we have no grounding or foundation for objective morality. We are left with mere subjective opinion.

It was not until late in the debate that Corbett actually offered an alternative explanation for the existence of objective moral values. Like many skeptics, Corbett  finally appealed to evolution as an explanation for morality. But does this work?

Frank Turek offers some good insight on this issue in his article Evolution Cannot Explain Morality. He offers four important points which I will summarize and expand on:

1. If evolution is true, why is rape morally reprehensible? Rape can help the survival of our species in general and, on an individual basis, the genes of the rapist are passed on to the next generation. If evolution is concerned with the survival of the fittest and the rapist is strong enough to overpower a weaker woman to ensure his genes survive, why is this wrong? Why is this any different than the "rape" we see take place in the animal kingdom?

2. If evolution is true, why was the holocaust a great moral evil? Again, if evolution is concerned with the survival of the fittest what is wrong with the Third Reich eliminating those who are weaker and less able to adapt? And what is wrong with killing the handicap so they cannot procreate? Doing so will actually strengthen our gene pool and increase our chances for survival in the future.

3. If evolution is true, what sort of foundation does this provide for morality? Can morals themselves change and evolve? If so, this does not provide any meaningful grounding for morality. What is good and moral today may not be tomorrow. And if this is the case, we have no assurance that the morals we hold to today are anything but passing fancies.

Important: Being moral or knowing morality is not what the debate is about. You can be moral and know right from wrong and at the same time not believe in God.  There, I said it. Will Michael Shermer please stop confusing this issue? But I digress.

As Frank Turek points out in his article, even if evolution is responsible for how we know right from wrong this still does not explain why something is right or wrong. Evolution cannot explain the existence of right and wrong nor can it function as an adequate foundation or grounding for right and wrong (this is often referred to as the "grounding" problem). How do morals evolve in a purely materialistic, mechanistic process? How does an immaterial transcendent moral law come from a purely material and natural process? In short, you can't get morals from matter. Furthermore, why would we be obligated to obey this evolved moral law? Obligation implies a mind or a person with whom we are obligated  to, not an arbitrary set of evolved moral codes.

Paul Copan in his book True for You, But Not for Me addresses the claim "Biological Evolution Explains Morality" (pgs. 91-97) and offers some additional helpful insights which I will summarize and expand on:

1. If evolution explains morality then beliefs like "Love your neighbor" are simply hardwired into us to help us survive. There is nothing objectively good about them. That is, there is nothing that makes these beliefs good independently of the fact that they have been programmed into our make-up. They are subjective and could have evolved otherwise.

2. If evolution explains morality, why should we trust our beliefs? Evolution is concerned with survival, not truth. So the moral beliefs that we recognize as "true" may actually be false and only believed by us because they aid our survival. So if evolution is responsible for our beliefs we have no reason to trust them since any true belief we hold would only be accidentally true. We could not know them to be true since knowledge is true belief based on adequate justification. Knowledge thus becomes impossible.

3. If evolution explains morality, moral beliefs turn out to be arbitrary. This was already touched on above. There is nothing necessary or obligatory about our moral beliefs. They could have evolved otherwise. Furthermore, abhorrent practices may be rationalized away on this view as long as they help survival (i.e. rape).

4. Basing morality on evolution commits the is-ought or naturalistic fallacy. Even if evolution can describe what is it cannot prescribe what ought to be. As Greg Koukl points out in his article Monkey Morality, evolutionary ethics cannot answer the question "Why ought I be moral tomorrow?" On this view, our moral impulses are just as physical as our hunger impulses. There is nothing necessary about these impulses. They just are. Both are arbitrary and could have evolved quite differently.

5. If evolution explains morality, how do we account for acts of self-sacrifice that we consider praiseworthy or heroic? Self-sacrifice certainly does not fit the survival of the fittest mentality. If evolution is true why would we even develop a sense of moral obligation to help those in need when doing so would endanger our own existence? And why would we develop the urge to praise those who sacrifice themselves for others who are weaker when this may hurt our own survival? Why blame others when they do not help those in need if they are only keeping in accord with their evolutionary heritage by looking out for their own self-interest?

Not that it makes a great deal of difference to the folks at this site, but actually my comments about the evolutionary origen of morality came during the first 14 minute case for the negative. The fact that Sean didn't recognize it as such led me to re-read it to him later in the debate.

One other note, the reason rape proves my point and not the opposite is that the children of women who are abandoned by the father are much less likely, in a primitive society, to produce young that live to reproductive age. That, of course, is the origen of the family--the need females, who have a limited number of eggs, to do what she can to make sure a fertilized egg becomes an adult. Women must invest years in raising a child, she will logically seek to increase the likelihood that her child will survive. Jim Corbett

Thanks so much for your comments and for visiting the site. I have put your comments in bold below so you know exactly what I am responding to.

Not that it makes a great deal of difference to the folks at this site...

We do in fact greatly appreciate your comments Jim...though I understand why you doubt it. : )

...but actually my comments about the evolutionary origen of morality came during the first 14 minute case for the negative.

I listened again to your entire opening statement and found nothing with regard to the evolutionary origin of morality. At one point toward the end you did say, "Is there another explanation for morality? I'm sure there are many." But you did not elaborate. Can you please point to exactly where you mention evolutionary morality in your opening statement and where you present the argument?

The fact that Sean didn't recognize it as such led me to re-read it to him later in the debate.

I completely understand why Sean didn't recognize it because after listening again I still do not recognize it. Could you point it out please?

One other note, the reason rape proves my point and not the opposite is that the children of women who are abandoned by the father are much less likely, in a primitive society, to produce young that live to reproductive age. That, of course, is the origen of the family--the need females, who have a limited number of eggs, to do what she can to make sure a fertilized egg becomes an adult. Women must invest years in raising a child, she will logically seek to increase the likelihood that her child will survive.

I think there is much that could be said here Jim but let me just make a few comments.

First, is this really the reason rape is morally wrong? Is this why we shutter and cringe when we hear a woman has been victimized by rape? Because we somehow instinctively realize that her children will not be as likely to produce young that live to reproductive age? Really??? And what if it turned out that children conceived through rape actually aided survival? Would a man forcing himself on a woman then be considered morally right? If so, this reflects the arbitrariness of any moral system founded on evolution.

Second, this still seems to commit the is-ought fallacy. Even if your story here is true, this only describes what is, not necessarily what ought to be. Why should any of us be moral tomorrow? Why should the rapist not rape tomorrow? Does this explanation you've provided give any reason why the rapist ought not to rape? Will the longevity of future generations be of any concern to the rapist considering rape? You are smuggling in the moral rule that we ought to be concerned with future generations.

Third, what about rape that occurs within the marriage relationship? What happens when a wife is not "in the mood" and the husband still takes it upon himself to forcefully rape his wife? Is that wrong? If so, why is it wrong? Your explanation given here does not seem to account for this.

Fourth, if evolution is true, how do we get morals from matter? And why should we be obliged to obey these arbitrary rules which resulted from a mindless process?

Thanks Jim again for your thoughts and your participation in the debate. May we both continue to put on our bucklers and swords of reason.

Mr. Corbett (if it’s not really you, then well, this applies to whoever is reading),

I appreciate your willingness to thoughtfully engage Christians on issues such as the one from this debate. I also commend your willingness to take truth seriously. My question for you has to do with your approach and mindset to handling doubt. In an effort to take truth seriously, do you ever investigate yourself? It seems like you do, but I don’t really know you. Obviously I didn’t come up with this idea, but it is one of the most profound encouragements ever uttered (“Know thyself”, as well as many other versions).

What I mean is, hypothetically speaking, let’s say Christianity turned out to be true, and you knew it was true. How would you respond? Before answering quickly, think if anything else would have to happen within you in order for you to turn your life over to trusting Jesus Christ as your Lord and Savior? I think this is a great question for those of us dealing with doubt. Searching ourselves is a great exercise ("What do I want to be true? Why do I think that? Could I change on that? What would happen if I changed? Am I okay with that? Why or why not?, etc")We should realize that our investigation of truth does not happen in a vacuum. After all, it is I who am doing the investigation (or in your case, it's you).

Consider the hypothetical situation above on Christianity and let me know what you think; how you think you would respond intellectually and emotionally, etc.
Thanks again for the debate,
Jake