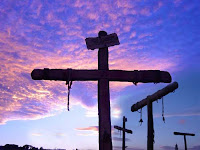 Crucifixion is a cruel form of execution, generally reserved for slaves and rebels. Death is agonizing and slow, the result of shock, exposure and, eventually, asphyxiation. Hanging from a cross constricts the diaphragm, inhibiting breathing. The only way to get air is to release pressure on the arms by pushing up against the nails that pierce the feet, requiring continual effort that could go on for days. Exhaustion eventually overtakes the victim and he suffocates.

For Jesus, though, the pain of the cross pales in the face of a greater anguish. There is a deeper torment that cannot be seen, one no camera can capture and no words can express, more excruciating than nails pinning Jesus’ body to the timbers, more dreadful than lashes ripping flesh from His frame. It is a dark, terrible, incalculable agony, an infinite misery, as God the Father unleashes his fury upon His sinless Son as if guilty of an immeasurable evil.

Why punish the innocent One? Nailed to the top of the cross is an official notice, a certificate of debt to Caesar, a public display of Jesus’ crime: “The King of the Jews.” The cross is payment for this crime. When punishment is complete, Caesar’s court will cancel the debt with a single Greek word stamped upon the parchment’s face: tetelestai. Finished. Paid in full.

Being king of the Jews is not the crime Jesus pays for, however. Hidden to all but the Father is another certificate nailed to that cross. In the darkness that shrouds from the sixth to the ninth hour, a divine transaction is taking place; Jesus makes a trade with the Father. The crimes of all of humanity—every murder, every theft, every lustful glance; every hidden act of vice, every modest moment of pride, and every monstrous deed of evil; every crime of every man who ever lived—these Jesus takes upon Himself as if guilty of all.

At the last, it is not the cross that takes Jesus’ life. He does not die of exposure, or loss of blood, or asphyxiation. When the full payment is made, when the last of the debt melts away and the justice of God is fully satisfied, Jesus simply dismisses His spirit with a single Greek word that falls from His lips: “Tetelestai.” It is finished. The divine transaction is complete.