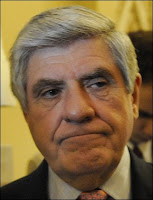 
Mr. Ben Nelson is a jolly old United States Senator for Nebraska. He was fighting for principle in opposing abortion funding in the health care reform moving through Congress.

Now he is backing health care reform without the language he originally demanded.

It would be easy to caricature Senator Nelson’s move unfairly. Some will say he is a Judas for betraying his ideals for money, but this is wrong. Judas personally benefited from his betrayal, while Senator Nelson merely got graft for his entire state.

Mr. Nelson will not get thirty pieces of silver . . . every Nebraskan will. Each one of them can share in the betrayal of their ideals, because Mr. Nelson has graciously made sure benefits will go to each one of them.

Judas compromised only his integrity, but Nelson has given the voters of Nebraska a chance to compromise the integrity of an entire state. Will they take the benefit at the cost of their values?

Is this comparison fair to a man like good old Ben Nelson? After all Ben Nelson is a modest man, a retiring man, a man eager to represent the values of Nebraska. Is there a more charitable read on his actions?

After all Mr. Nelson meant to do good. Comparing Nelson to Judas must surely be as overblown and overly partisan as comparing him to Benedict Arnold. Arnold betrayed the United States for money, but Mr. Nelson will only vote for a mess of a bill for money.

After all, the bill is not so bad that it will not do some good. The good-old Senator was trying to do a noble deed by extending health care to millions, not cause the death of the Messiah or betraying his oath of office! It is by his intentions we should judge him, not by the results. He meant well and that is all we should expect of our elected officials.

Heaven knows Judas and Benedict Arnold did not mean to do good by their evil actions. Call Mr. Nelson incompetent and venal, but never call him a traitor.

Let us not be inflexible in our evaluation of Mr. Nelson. Of course to get the good things, he had to allow Nebraskan tax dollars to go to abortion, give money and favors to wealthy donors to his campaigns, and expand the scope of government.

Mr. Nelson simply has done what so many parents have to do every Christmas. He has compromised what he wishes he could do so to do some good. He is giving some Nebraska children a gift of health care and to do so had to fund the death of other Nebraskan children.

Many would have dodged this hard decision, but not Senator Nelson. Having paraded his convictions that no children should die using tax money, he was forced to bend a bit and kill a few by indirect means in order to help some.

This is a profile in flexibility.

Senator Ben Nelson, if all turns out as he wishes, will be able to celebrate Christmas this year knowing that he gained graft for his state, passed a bill his constituents did not want, all the while standing at the center of the media spot light. This is the job a Democratic senator is elected to do and he did it.

Some will mock him, others misunderstand him, but Mr. Nelson is merely celebrating Christmas in his own way: the season when a decree went out from Caesar Augustus that all the world should be taxed and an order went out from Herod for the government slaughter of innocents.