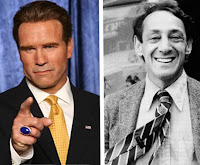 Despite the hard work and moral cries of pro-family parents, grandparents and other concerned Californians, Governor Arnold Schwarzenegger has signed SB 572, “Harvey Milk Gay Day” for schoolchildren, into law.

This morning, SaveCalifornia.com issued our response to the media (see news release below). Pro-family Californians are appropriately outraged today (see comments on our Facebook). I want to give you perspective and direction.


Thank you for your hard work and prayers to protest “Harvey Milk Gay Day.”

Your phone calls, emails, faxes, and petitions were admirable and pulled off four Democrats in the State Assembly. But sadly, Arnold Schwarzenegger has plugged his ears to parents. In the face of opposition, we must always stand strong for our values and do what we can.


California voters are reaping what they have sowed.

In 2003 when he was first elected, Schwarzenegger was on record supporting giving all the rights of marriage to homosexuals (later he flipped and now supports homosexual “marriage” licenses too); he supported homosexual couples adopting children; and he had posed nude in a homosexual magazine in his body-building years.

A couple years ago, he hired a homosexual activist, Susan Kennedy, as his chief of staff. Now, by signing SB 572 and SB 54, which recognizes out-of-state homosexual “marriages” in clear violation of Prop. 8, Schwarzenegger supports the ENTIRE homosexual-bisexual-transsexual agenda, just like Jerry Brown and Gavin Newsom do.


What’s worse? A liberal Democrat or a liberal Republican?

or at any of his five regional offices.

“Harvey Milk* was a sexual predator of teens, an advocate of polygamous relationships, a public liar, and is in no way a good role model for impressionable schoolchildren,” said Randy Thomasson, president of SaveCalifornia.com. “Sadly, children in public schools will now have even more in-your-face, homosexual-bisexual-transsexual indoctrination. This provides the strongest impetus yet for loving parents to remove their children from anti-family public schools.”

Schwarzenegger vetoed ‘Harvey Milk Day” last year, he signed it this year. The Governor also previously claimed to oppose same-sex “marriage,” but now supports destroying the definition of marriage as only between a man and a woman, in court, and by his signing of SB 54, to recognize out-of-state homosexual “marriages” in violation of Prop. 8.

For several months, SaveCalifornia.com has been leading parents and grandparents to call, email, fax, and petition Governor Schwarzenegger to veto “Harvey Milk Day.” The clear majority of correspondence to the Governor was opposed to SB 572. As a whole, Californians are 4 to 1 against the notion of statewide day of significance honoring the San Francisco gay activist.

Thank you for this post - clear, concise and without emotion.

I put you on my blog for others to check out the facts/data so they are well informed.

I appreciate people like you, Aaron, who are willing to lay out the facts, which do not lie. You are serving others in this way.

Keep up the fight!

Thanks so much for the link, your support, and your kind words!