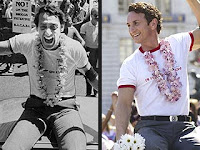 A final push is under way to defeat legislation in California that would honor a deceased homosexual activist.

The "Harvey Milk Day" bill calls for recognition, in public schools, of the former homosexual San Francisco supervisor who was assassinated in 1978. The measure now sits on Governor Schwarzenegger's desk, and he has until Sunday night to sign or veto it.

Randy Thomasson of SaveCalifornia.com tells OneNewsNow the skirmish over SB 572 is a war on behalf of children.

"The homosexual activists want to sexually indoctrinate children to believe in their agenda of homosexuality, trans-sexuality, bisexuality," he states bluntly. "They are going against pro-family citizens who in larger numbers are calling the governor and saying veto SB 572, Harvey Milk Gay Day."

And the danger if the bill is signed? "Children would be taught every year that cross dressing, that gay pride parades, that homosexual weddings are good and natural, [and are] something to aspire to," Thomasson laments.

SaveCalifornia.com has launched a final weekend phone blitz to convince the governor to reject the measure. Another California-based group -- Traditional Values Coalition -- is calling on its supporters to do the same.
Posted by Aaron at Monday, October 12, 2009