The Zoolander Objection Part 1 of 2 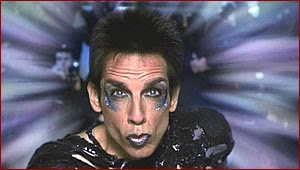 “But who created God?”, is what I call the Zoolander Objection to the cosmological argument for the existence of God. I argue here that this common response to the cosmological argument, whether given sarcastically or seriously, can only come from someone who does not fully grasp the argument. Furthermore, it is very similar to a memorable scene in the film Zoolander. But in order to make the Zoolander connection, I must first layout the argument. The goal of this argument is to show that an eternal first cause of everything, exists.[1]

Below are some key features of this argument, followed by an explanation for the naming of the Zoolander Objection.

A. “Infinite/eternal” distinction.
How can the premise "Actual infinites cannot exist" be used in an argument for the existence of God? Isn’t God infinite? What needs to be clarified here is what is meant by ‘infinite’. The term ‘infinite’ means an infinite set of finite things. This is not synonymous with the term ‘eternal’. An infinite is a quantity, while eternity is a duration. (One could say that an eternity is a quantity of time, but this slightly misunderstands the concept behind the word 'eternity'. The concept of eternity refers to the passing of time. That is, it refers to how long the time goes for; the duration of it.) An infinite is eternal, but an eternal thing is not necessarily an infinite. (Much like all apples are fruit, but not all fruits are apples.) An infinite would be eternal because it would be a quantity that goes on forever if it were to be counted. So since eternity has to do with duration rather than quantity, an eternal thing can only be one of two things: An infinite set, or a single thing that simply always exists.

C. ‘Cannot exist’
Although the concept of a potential infinite set can be utilized in mathematics, an actual infinite set cannot really happen. The non-crossing-over feature of actual infinites leads to the conclusion that they cannot actually exist. The occurrence of a particular thing in the set would always be waiting for its turn to occur. Because there is an infinite amount of things before it, the sequence would never ‘cross over’ to the time it takes place. It would never happen. This is the case for every part in the infinite series and makes an infinite series impossible in actuality.

II. Our world cannot be part of an infinite series.

If we were to trace the sequence of events from now backwards into history, we realize that there are a few different options to explain how this sequence of events came about. There are three options: 1) the events are an infinite set, 2) a single eternal thing started them, or 3) they started from nothing.

Option 3 is obviously impossible, so we can discard it. It cannot be the case that nothing existed and then something did. How can nothing cause something to happen? There’s nothing to do the causing. Therefore, since something exists, and something cannot come from nothing, something must have always existed.

This brings us to options 1 and 2. The sequence of events that we trace from now back into the past either 1) has no beginning and is an infinite set of events, or 2) began from a single eternal thing. These two options both have eternal histories to meet the criteria of always existing. Furthermore, they are the only two logical possibilities to explain how something could have always existed (i.e. they are the only two ways something can be eternal): either the sequence of events from now, back throughout all of history, rewinds into the past forever with no beginning, or rewinds into the past and terminates in a single eternal uncaused thing.

This is where the impossibility of actual infinites is crucial to this line of reasoning. Since it is impossible that the sequence of events that go from now back into history be infinite, then they had to originate from a single uncaused eternal thing. This is not merely a postulated conclusion being suggested because the other two options are impossible. This argument demonstrates that things could not be any other way than what the argument concludes in addition to the other two options being impossible. Again, there had to be a beginning to the sequence of events that make up all of history. They couldn’t have come from nothing, so they had to come from something that has always existed, but not as an infinite set. Therefore, an eternal first cause of everything is the answer. This is demonstrated by the key features of the argument: Something exists, actual infinites cannot exist, but something has to have always existed. It has to be this way. In poor grammar, an eternal first cause of everything cannot-not exist.

Now, after going through all this, to hear the question on what created this single eternal first cause of everything, is to assume the questioner either wasn’t listening or doesn’t understand the argument. To ask this question, is to ask what caused this uncaused thing to exist.

Sometimes, this statement is raised in a sarcastic fashion attempting to point out that the cosmological argument is either incomplete or leads to an infinite regress of causes. This sarcastic presentation of the “Who created God then?” question still very much qualifies as a Zoolander Objection. This is because the person raising the objection can only do so if they do not fully grasp the argument. There is still a failure to see that a single uncaused eternal thing exists.

Here now, finally, is why I label this objection the Zoolander Objection. In the film Zoolander, J.P. Prewitt (David Ducovany) provides Derek Zoolander (Ben Stiller) with an exhaustive explanation of how and why male models have been used as assassins. He gives examples of incidents when they were used and gives all the reasons why. He says it is because male models are in excellent physical shape, can gain access into the most secure facilities, and because they will do anything they’re told. So after hearing this complete explanation of exactly why male models have been used as assassins, Derek, in his innocent and comical, but slow witted way, asks, “But why male models?”. Prewitt, surprised at the statement, replies, “Are you serious? … I just explained that.”

Footnotes:
[1] For thoroughness, the formal argument skeleton has been included in the appendix. For space and time constraints, this blog post will just be going through the argument in a quicker way by explaining its key features.

The argument presented here is my version of Samuel Clarke’s cosmological argument for the existence of God. He calls it the argument from contingency.[3]