Are You An "Extremist"? 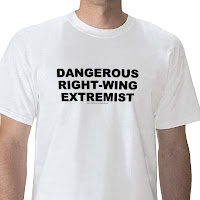 While the rest of us may be worried about violent Mexican drug gangs on our border, or about terrorists who are going to be released from Guantanamo, the Director of Homeland Security is worried about "right-wing extremists."

Just who are these right-wing extremists?

According to an official document of the U.S. Department of Homeland Security, right-wing extremists include "groups and individuals that are dedicated to a single issue, such as opposition to abortion or immigration." It also includes those "rejecting federal authority in favor of state or local authority."

If you fit into any of these categories, you may not have realized that you are considered a threat to national security. But apparently the Obama administration has its eye on you.

According to the same official document, the Department of Homeland Security "has no specific information that domestic rightwing terrorists are currently planning acts of violence." But somehow they just know that you right-wingers are itching to unleash terror somewhere, somehow.

So-called "honor killings" by Muslims in the United States, including a recent beheading of his wife by a leader of one of the American Muslim organizations, does not seem to arouse any concern by the Department of Homeland Security.

When it comes to the thuggery of ACORN -- its members harassing the homes of bankers and even the home of Senator Phil Gramm when he opposed things that ACORN favored -- the Department of Homeland Security apparently sees no evil, hears no evil and speaks no evil.

Maybe they are too busy worrying about right-wing "extremists" who don't like abortions or illegal immigration, or who favor the division of power between the state and federal governments established by the Constitution.

In one sense, the Department of Homeland Security paper is silly. In another sense, it can be sinister as a revealing and disturbing sign of the preoccupations and priorities of this administration -- and their willingness to witch hunt and demonize those who dare to disagree with them.

Reportedly, the FBI and the Defense Department are cooperating with the Department of Homeland Security in investigations of returning veterans from Iraq and Afghanistan. That people who have put their lives on the line for this country are made the target of what is called the Vigilant Eagle program suggests that this administration might be more of a threat than the people they are investigating.

All this activity takes on a more sinister aspect against the background of one of the statements of Barack Obama during last year's election campaign that got remarkably little attention in the media. He suggested the creation of a federal police force, comparable in size to the military.

Why such an organization? For what purpose?

Since there are state and local police forces all across the country, an FBI to investigate federal crimes and a Department of Justice to prosecute those who commit them, as well as a Defense Department with military forces, just what role would a federal police force play?

Maybe it was just one of those bright ideas that gets floated during an election campaign. Yet there was no grassroots demand for any such federal police nor any media clamor for it, so there was not even any political reason to suggest such a thing.

Perhaps there will never be such a federal police force. But the targeting of individuals and groups who believe in some of the fundamental values on which this country was founded, and people who have demonstrated their patriotism by volunteering for military service, suggests that this potential for political abuse is worth watching, as Obama tries to remake America to fit his vision.
Posted by Aaron at Friday, June 26, 2009

I loved this post, Aaron. It's frightening what is considered "scary" these days.
Keep writing!

Thanks so much for the comment. I wish I could take credit for the article but it was actually written by Thomas Sowell (I try to put the link and author at the top of each article unless it is my own creation). Hope you visit the site again soon!