LET'S GO GET THEM BIGOTS! 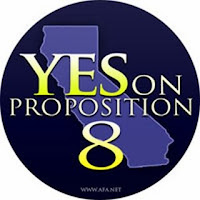 Apparently sites such as "You Can't Hide Your Hate" don't go far enough in listing the names of donors to the "Yes on 8" campaign in California. Now there is a website showing exactly where these donors live! The site is simply called "Prop 8 Maps" and states, "Proposition 8 changed the California state constitution to prohibit same-sex marriage. These are the people who donated in order to pass it."
Mark Hemingway of The Corner writes "Here's a handy map Prop 8 opponents have put together showing you where donors to prop 8 live. You have to love the "Jump to San Francisco, Salt Lake City , or Orange County" feature. If someone put together a map showing where all the gay people in the neighborhood live that would properly be called an implicit threat, but this is altogether different, right?"
Proponents of same-sex marriage such as Raphael have not been afraid to post blogs openly endorsing this site, though he has been less enthusiastic about engaging in any type of meaningful debate. Raphael does say, "Now, PLEASE!!!!! Harassing donors is NOT going to achieve anything. Treat people with respect. And fight the bigotry, not the bigot." But it is hard for me to take this comment seriously. How could a website such as this be used to "fight the bigotry, not the bigot?" As Mark comments above, imagine if someone were to put a map together showing where all the gay people in the neighborhood live. To make the example analogous, suppose there was a disclaimer on the map which read, "Hate the homosexuality, not the homosexual." No one would view that map as a moral crusade against homosexuality but rather as a threat against homosexuals themselves. And so it is with this website. As I have noted before, this may just be one more example of Prop 8 opponents attempting to hide their own hate and intolerance for those who disagree with them.
Melinda Penner has rightly noted that this website is an abuse of freedom. Freedom is not the right to do whatever one chooses to do. Freedom is the right to do what one ought to do. And a person ought not to do this. This is especially true given the harassment and violence already sufferred by some Proposition 8 supporters.
Posted by Aaron at Tuesday, January 13, 2009

Great article on "Prop8maps." I like your point that disclosing where people live doesn't help with arguing ideas. I was thinking of you when it came on O'Reilly last night. Bill said he was going to contact Google demanding they either remove it or disclose the person responsible. Since disclosure is so important, this seems only fair. What Bill didn't mention is that Google was one of the largest "No on 8" contributors and publically made a statement opposing it on behalf of the company http://www.pridesource.com/article.shtml?article=32384. Good luck Bill! It should make for another interesting attempted interview by producer Jesse.