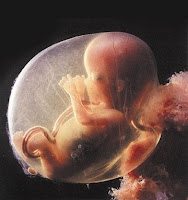 January is Sanctity of Life Month. This seems highly ironic given the most radical pro-abortion choice candidate in U.S. history will be sworn in as President in just a few days.

If you haven't done so, you need to read "Obama's Abortion Extremism" by Robert George. Then you need to sign the petition to fight against the Freedom of Choice Act (FOCA).

It's a shame that Obama's "change" doesn't extend to the unborn.
Posted by Aaron at Wednesday, January 14, 2009