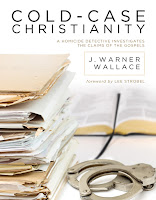 In Cold-Case Christianity, J. Warner Wallace, a former atheist and seasoned cold-case homicide detective, takes his knowledge and expertise gleaned from years of law enforcement experience and applies important investigative principles in examining the historical reliability of the gospels. Wallace has been sharing his insights and wisdom for years through blogging, articles, and podcasts as creator of the PleaseConvinceMe.com website, and recently has joined with Stand to Reason as a speaker and contributor.

This book is not just another typical apologetic arguing for the trustworthiness of the New Testament. It is unique among its peers, tackling the subject from a perspective only a homicide cop could provide. Cold-case homicides are historical investigations, and it is his skill and perspective as an investigator that gives Wallace the essential talents and qualifications to examine the historical accuracy of the gospels:

Christianity makes a claim about an event from the distant past for which there is little or no forensic evidence. Like cold cases, the truth about what happened can be discovered by examining the statements of eyewitnesses and comparing them with what little additional evidence is accessible to us. If the eyewitnesses can be evaluated (and their statements can be verified by what we have available), an equally strong circumstantial case can be made for the claims of the New Testament. But are there any reliable eyewitness statements in existence to corroborate in the first place? This became the most important question I had to answer in my personal investigation of Christianity. Were the gospel narratives eyewitness accounts, or were they only moralistic mythologies? Were the Gospels reliable, or were they filled with untrustworthy, supernatural absurdities? The most important questions I could ask about Christianity just so happened to fall within my area of expertise.[1]

One of the things I enjoyed most while reading this book were the personal recollections and stories as an investigator that Wallace recounts, and how the principles he learned and applied on the job can then be used apologetically in investigating and defending the claims of the gospels. The book is an outstanding treatment defending the reliability of these New Testament texts and serves as an important and exceptional addition to any apologetic library.

The book is broken down into two main sections (fourteen chapters) along with a postscript and appendix:

Section 1: Learn to Be a Detective: Ten important principles every aspiring detective needs to master (chapters 1-10)
Section 2: Examine the Evidence: Applying the principles of investigation to the claims of the New Testament (chapters 11-14, postscript)
Appendix: Witnesses and Resources: Compiling the resources necessary to make the case

Section 1: Learn to Be a Detective

In section one, Wallace lays a foundation for thinking like a detective that every Christian apologist should master. Each of these ten chapters focuses on a different investigative principle that is not only useful for examining the claims of the gospels but can also be effectively applied in other areas of apologetic study.

In chapter one, Wallace warns against the dangers of beginning an investigation with presuppositions that can affect the outcome of your search for truth. Investigating Christianity is no different. If we start with naturalistic presuppositions or confuse science with scientism, we may only end up begging the question and preventing ourselves from discovering truth. As much as it is within our power, we need to take note of personal bias and examine the evidence objectively.

In chapter two, Wallace introduces the idea of abductive reasoning: inferring to the most reasonable explanation. Investigators are primarily concerned with what is most reasonable, not with what is possible. Christian apologists would do well to keep this in mind, especially when confronted with objections such as “Isn’t it possible you’re wrong?” or “Well it’s possible that…” Just because something is possible it doesn’t follow that it’s reasonable. The minimal-facts approach to the resurrection is an example of abductive reasoning, and Wallace ends this chapter by persuasively arguing that “Jesus rose bodily from the grave” is the most reasonable explanation given the historical data.

In chapter four, Wallace emphasizes the importance of evaluating the reliability of witnesses. Whether or not a witness is reliable will determine whether or not you can trust their testimony. Critical to this discussion is realizing that disagreement among witnesses is not license to automatically disqualify their testimony. Christians and skeptics alike should be careful not to confuse inerrancy or infallibility with reliability. Witnesses should be given the benefit of the doubt and apparent contradictions can often be explained by differing perspectives. This is just as true for the biblical eyewitnesses. The writers of the gospels claim to be eyewitnesses and were recognized as such from the very beginning. Whether or not they can be trusted will be the topic of section two.

I found chapter five to be very interesting as Wallace applies the art and science of Forensic Statement Analysis to help evaluate statements within the gospels. In particular, he looks at the gospel of Mark and builds a strong case that Mark is documenting the eyewitness testimony of the apostle Peter. The internal evidence of language within this text corroborates the testimony of the early church fathers, giving us good reason to trust this historical account of Jesus’ life and ministry.

In chapter six, Wallace tackles the topic of textual criticism by making an important distinction between artifacts and evidence. Just as a crime scene will contain evidence related to the crime as well as incidental artifacts which play no role, so also there have been textual variants (artifacts) which have crept into the genuine text of the New Testament (evidential statements) as the text has been transmitted through the centuries. But the presence of artifacts in no way compromises our ability to identify the evidence and come to a reasonable conclusion, nor does it warrant the wholesale rejection of the text, even if some incidental questions remain unanswered. Through the art and science of textual criticism, textual critics are able to identify the artifacts (textual variants) and separate them from the evidence (genuine text of the New Testament), just as a detective does when processing a crime scene.

Chapter seven is a much needed antidote to our culture’s preoccupation with conspiracy theories. For a conspiracy to be successful there are a number of factors which increase its potential for success (such as a small number of conspirators, thorough and immediate communication, short time span, significant relational connections, and little or no pressure), none of which apply to the beginning of Christianity and the testimony of the apostles. Wallace states,

I can’t imagine a less favorable set of circumstances for a successful conspiracy than those that the twelve apostles faced…None of these eyewitnesses ever recanted, none was ever trotted out by the enemies of Christianity in an effort to expose the Christian “lie”…These men and women either were involved in the greatest conspiracy of all time or were simply eyewitnesses who were telling the truth. The more I learned about conspiracies, the more the latter seemed to be the most reasonable conclusion.[2]

Chapter eight lays the groundwork for a very important subject: “chain of custody.” In short, is there good reason to believe the gospels (1) are the product of eyewitnesses, (2) truthfully record the life of Jesus, and (3) have been accurately preserved and transmitted over the centuries? If so, we can have confidence in our knowledge of the original “crime scene.” Wallace takes up this issue and examines it in greater detail in section two.

In chapter nine, Wallace discusses evidential sufficiency and three reasons people deny the truth: rational, emotional, and volitional. When it comes to making a decision, requiring complete knowledge or absolute certainty is unreasonable, and this is no less true when it comes to spiritual and eternal matters. Unanswered questions and “possible doubts” are not trump cards against what we do know. Wallace aptly applies this to the problem of evil, arguing that evil is evidence for God, and showing that the problem of evil is more emotional than rational.

Chapter ten is a fitting close to section one as Wallace helps Christians prepare for an attack by looking at some common strategies of defense lawyers, how they parallel the tactics of religious skeptics, and skillfully showing how to intelligently think about these matters. Christians need to remember that possible alternatives are not reasonable refutations. In other words, an assertion is not an argument, and an alternative explanation is not a refutation.

In section two, Wallace now takes the principles of detective work from section one and specifically applies these principles in examining the gospels. He argues for their accuracy and their trustworthiness by establishing a historical chain of custody from the time of the apostles to the fourth century. Wallace anticipates certain objections and ends each chapter by addressing some of the most common.

In chapter eleven, Wallace begins his chain of custody by looking at the early dating of the gospels, which helps establish the authors as actual eyewitnesses. He presents numerous lines of evidence, some of most interesting and unique being Mark’s gospel as an early “crime broadcast” and his protection of key players. Wallace ends by showing that the most reasonable conclusion based on the circumstantial evidence is that the gospels were written early during the time of the eyewitnesses.

Chapter twelve was another of my favorites, dealing with the topic of internal (“inside out”) and external (“outside in”) corroboration of the gospels. Internal corroboration includes the fascinating discovery of undersigned coincidences, and Wallace provides some great examples. But evidence of authenticity is not only found within the gospels but outside as well, as Wallace presents the evidence from non-Christian sources and archaeology. The verdict? The gospels are a reliable and trustworthy account, consistent with the claims of other contemporary evidences.

Chapter thirteen is perhaps the hardest hitting “chain of custody” chapter as Wallace traces the transmission of the gospels from the apostles and testimony of the early church fathers all the way to the fourth century. Along the way, Wallace shows that the Jesus presented in the gospels was “not a late invention or exaggeration; it is the version of Jesus that existed from the very first telling.”[3] Not only was the gospel message recorded early and recited to the students of the apostles, but the texts we have today have been accurately preserved and are consistent with this early message.

In chapter fourteen, Wallace ends this section by looking at the issue of bias. Criminal behavior is often motivated by one of three things: financial greed, sexual or relational desire, and pursuit of power. But unlike criminals, the apostles had nothing to gain by lying and everything to lose due to their testimony of the risen Christ. The most reasonable conclusion? The apostles reported what they actually observed.

J. Warner Wallace embodies what Stand to Reason constantly emphasizes: knowledge, wisdom, and character. His book is no different. Wallace takes the knowledge he has gained as a cold-case homicide detective, wisely applies principles of historical investigation to the claims of the gospels, and presents all of this material in a winsome and attractive manner.

Bottom line: Cold-Case Christianity is an outstanding work defending the authenticity and trustworthiness of the four gospels from the unique perspective of a homicide detective. It deserves to be read by both Christians and skeptics alike, and especially all of us “one dollar apologists” who seek to be effective ambassadors for Christ.
[1] J. Warner Wallace, Cold-Case Christianity: A Homicide Detective Investigates the Claims of the Gospels (Colorado Springs: David C Cook, 2013), 18.
[2] Ibid., 114-115.
[3] Ibid., 230.
Posted by Aaron at Tuesday, June 18, 2013

My favorite part of the book was his explanation of forensic writing. I had never read about that anywhere else.