What is Just War Theory? 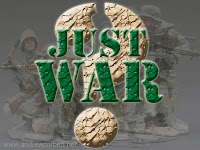 (Reasons to Believe) by Kenneth Samples

Through the centuries Christian thinkers have taken different positions on the controversial subject of war. Three broad theories concerning the morality of war for the Christian can be identified: activism, pacifism, and selectivism. Activism asserts that it is virtually always right to participate in war. Strict pacifism insists that it is never morally right to partake in war. Selectivism argues that it is sometimes right to take part in war.

1. Jus ad bellum (Justness of War)
Concerning the moral justness of waging war, a just war must conform to the following moral considerations:

A Just War will

2. Jus in bello (Justice in war)
Concerning the conduct of war, strategy and tactics must be just:

A Just War will be conducted

Just war theory has been criticized for various reasons through the years (e.g., by failing to appreciate the benefits of a preemptive strike, being unrealistic in its moral expectations, being practically unworkable), yet it nevertheless remains the most commonly accepted position among Christian thinkers when it comes to evaluating the moral considerations of waging war.