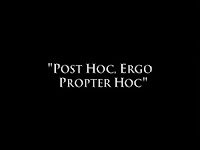 Say what? Post hoc ergo propter hoc is Latin for "after this, therefore because of this." It is frequently abbreviated "post hoc" and may also be called the fallacy of false cause or questionable cause.

Please note: you always get bonus points for saying it in Latin and it makes you sound smarter.

The post hoc fallacy occurs when a person concludes that a particular event caused another event simply because the first preceded the second in time. In other words, A caused B because A occurred before B. The danger in this line of reasoning is that nothing definitive regarding causation can be drawn from temporal sequence. Simply because one thing precedes another it does not necessarily follow that the first caused the second. We need sufficient reason or evidence to determine a causal relationship between two events, not merely temporal sequence.

"Jesus is a Copycat Messiah."

In the realm of apologetics this fallacy is seen in the claim made by skeptics that Jesus is simply a pagan deity repackaged for a Christian audience. Even if it were true (which it isn't) that pagan mystery religions preceding Christianity had similar messiah stories with dying and rising gods, it does not follow from this that the life of Jesus was invented or that His resurrection never took place. Similarity would not necessarily mean dependence. Greg Koukl provides a very helpful illustration:

In 1898, Morgan Robertson published a novel entitled Futility. The story was a fictional account of a transatlantic voyage of the cruise ship Titan traveling between England and New York. The largest vessel afloat displacing 45,000 tons, the Titan was considered virtually unsinkable. Yet in the middle of the night in April, with three massive propellers driving the ship forward at the excessive speed of 25 knots, it collided with an iceberg and sunk. Since the number of lifeboats was the minimum the law required (though twice that was needed for its 3,000 capacity), more than half of its passengers perished.

Fourteen years later in April, the world’s largest luxury liner with a displacement of 45,000 tons – the indestructible Titanic – departed from England on a transatlantic voyage to New York. In the middle of the night, the Titanic’s triple screws drove the ship at the excessive speed of nearly 25 knots into an iceberg and sunk. Since the Titanic was fitted with less than half the number of lifeboats needed for its 3,000 capacity (the minimum the law required), more than half of its passengers were lost.

This real-life coincidence makes a crucial point. Regardless of the similarity between two accounts of different events, the second cannot be summarily dismissed as an invention simply because the first turns out to be fiction. Whether or not the details of the Titanic’s disaster are accurate is determined by its own body of evidence, unrelated to the fictional story of the ill-fated Titan that came before.

In sum, the evidence for the life of Jesus and arguments for His resurrection must be examined and judged on their own merit and not simply dismissed out of hand. This commits the post hoc ergo propter hoc fallacy.

The next time someone claims that Jesus is a copycat Messiah just like Osiris, Horus, or Mithra, simply respond, "I knew you were going to say that. Whenever I wear this shirt a skeptic always raises that objection."
Posted by Aaron at Monday, March 08, 2010