"Religion is the Cause of All Evils in this World" - really? 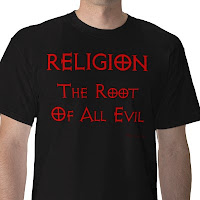 
After 9/11, it became very fashionable for atheists to say, “Religion is the cause of all evils in this world; if we just got rid of religion, we would solve a lot of our problems.” (in fact, I had some guy say this to me at a wedding I attended recently—what a time to bring up religious controversy—at a wedding of all places!)

And here is my own response to the “religion is the problem” argument:

We’ve already had our great experiment of eradicating religion. It was called the twentieth century, the most secular century in the history of mankind. What happened? Let’s see… Marxism, Communism, Fascism, Nazism, two World Wars, the Holocaust and other genocides, the atomic bomb, the Korean War, the Vietnam War, the Cold War, and the bloodiest century in human history… all in the name of secularism and scientific “progress”.

Don’t tell me that religion is the problem, or as Marx said, the “opiate of the masses.”
Posted by Aaron at Thursday, January 07, 2010