This is Not Good: Rob Bell's Bad Theology 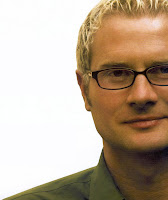 Rob Bell's theological trajectory is not good. Case in point, this article from the Boston Globe.

Here, for example, is Bell's definition of an evangelical, completely devoid of any theological or historical meaning.

I embrace the term evangelical, if by that we mean a belief that we together can actually work for change in the world, caring for the environment, extending to the poor generosity and kindness, a hopeful outlook. That's a beautiful sort of thing.

And here's Bell's take on the heart of Christianity:

At the heart of the Christian story is resurrection, the belief that this world is good, and that, as a follower of Jesus, a belief that God hasn’t abandoned the world, but is actively at work in the world. Even in the midst of what can look like despair and destruction there is a new creation present.

At one point the interviewer notices the Rob doesn't talk about religion or even mention Jesus very much. To which Bell replies:

I think we have enough religious people who are going around trying to convert people. My guard is up when somebody is trying to convert me to their thing. Are you talking to me because you actually are interested in this subject, because you care about me as a human, or am I one more possible conversion that will make you feel good about your religiosity? I don’t have any embarrassment about my religion, and it’s not that I'm too cool, but I would hope that the Jesus message would come through, hopefully through a full humanity. If you have something to say, whether you're religious or not, if it is truly Christian and Jesus-centered, then it will help and be interesting and compelling to people, regardless of their world view. But I’m not just interested in talking to Christians. I'm interested in what does it mean to be fully human.

This is just so confused and unhelpful. It is classic old-school liberalism: Jesus as the fullest flower of fair humanity. The emphasis on creation has swallowed up the biblical notion of redemption. The shocking, vibrant apostolic message centered on the life, death, resurrection, coming kingdom, and coming judgment of Jesus Christ has morphed in a banal, same-old-same-old message about actualizing our humanity.

Yes, there are hucksters for the "faith" trying to cajole people into the kingdom. But before we chide those interested in conversion, we should remember that when King Agrippa asked Paul if he was trying to persuade him to be a Christian, Paul said "I would to God that not only you but also all who hear me this day might become such as I am" (Acts 26:29). And this was after he talked openly--to secular people mind you--about repentance, the sufferings of Christ, and the resurrection of Jesus from the dead.

I want to think Rob's theology is better than what comes across in print. But the fact is that I never hear him in an interview (nor elsewhere for that matter) give an explanation of the gospel or a summary of the heart of Christianity that sounds anything like what we read from Peter, Paul, or Jesus. Rob is trying to help people. I bet he's a nice, sincere guy. I'm sure he faces demands and pressures that I can't imagine. But he keeps getting the most important questions wrong, and his theology keeps getting worse and worse.

I don't know how to say this without sounding really condescending, but we should pray that the Lord would give Rob a clearer sense of the gospel and a courage to share it with all the winsomeness, cultural relevance, forthrightness, and biblical fidelity that Paul displayed at the original Mars Hill in Acts 17. No matter the extremes he may have seen in some unhealthy backwards churches out there, there's no excuse for so frequently and so painfully botching the basic plotline of the Bible and ignoring the most important contours of the faith. With Rob's notoriety, he has no choice but to ignore most of what people say about him. But I hope that he is open to thoughtful criticism. Not from me, but from someone he trusts who can ask some hard questions prod him back to surer ground.

I wouldn't bother to mention Bell except that his influence and his church are larger than life in my old hometown. Emergent Village may be a falling star, but Rob Bell still draws a crowd. Talk to most youth group kids in America and they've not heard of Brian McLaren; they're not reading Joel Osteen; most of them (unfortunately in my opinion) are probably not reading John Piper, and they're certainly reading Kevin DeYoung less than any of those other guys. But they know Rob Bell. He is reaching many people, especially the young.

But, as always, the question is: what is he reaching them with? Not with the good stuff of the good deposit I'm afraid (2 Timothy 1:8-14).