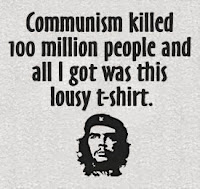 Marxism, we’re often told, is dead. While Communism as a system of authoritarian power still exists in countries like China, Marxism’s contemporary hold over people’s minds, many claim, is nothing compared to its glory days between the Bolshevik seizure of power in Russia in October 1917 and the Berlin Wall’s fall twenty years ago.

In many respects, such observations are true. But in other senses, they are not. We need only look at Western Europe—the place where Marxist thought first emerged and took root. One trivial, albeit disturbing sign is many young West Europeans’ willingness to wear t-shirts emblazoned with the Communist hammer and sickle or Che Guevara images. If you want confirmation of this, just take a stroll through downtown Amsterdam, Stockholm, or Rome.

No doubt, in many cases the t-shirt images are simply reflections of youthful rebelliousness. But it’s difficult to refrain from asking wearers of such clothing whether they also possess a t-shirt inscribed with the Nazi swastika. They would surely be deeply offended at such a suggestion. But their willingness to parade the hammer and sickle reflects either historical ignorance or a failure to accept that it is as much a symbol of terroristic criminal regimes as the swastika: just ask any survivors of Stalin’s Gulag, Vietnam’s “re-education” camps, or the Khmer Rouge’s killing fields.

Then there is the persistent grip of Marxist-inspired mythology on Western Europe’s historical imagination. A good example is Karl Marx’s presentation of nineteenth-century capitalism as a period in which a small group became wealthy and millions were impoverished. This remains an article of faith for the European left and some on the European right.

No doubt, there was considerable upheaval as entire societies transformed from agricultural arrangements to heavy industry. But as the Oxford economic historian Max Hartwell proved conclusively in his famous debates with the Marxist scholar Eric Hobsbawm, on every measurable variable of the standard of living, the quality of life for the overwhelming majority of people improved dramatically because of industrial capitalism.

So why are Marxist myths and symbols implicitly accepted so casually by many West Europeans who would never consider themselves Communists? One obvious reason is that Western European nations were never subject to Communist regimes. Hence it was easier to retain romantic notions about Marxism and ignore or rationalize the brutal reality on the other side of the Iron Curtain.

Then there is the fact that the continental European left was far more influenced by Marxism than, for example, Anglo-American center-left movements. Germany’s Social Democrat party, for example, only formally renounced Marxism as a source of ideas in 1959.

But perhaps the most significant reason for Marxism’s lingering background influence on much West European opinion is an Italian philosopher who died 72 years ago. If you ever doubt the power of intellectuals, the case of Antonio Gramsci is a useful corrective.

A rather unconventional Marxist by 1930s Stalinist standards, Gramsci argued that the key to power lay less in controlling the economic means of production than in capturing the engines of “cultural hegemony” – the universities, the media, the arts, and religious institutions. Gramsci recognized that the Russian Bolsheviks’ violent seizure of power in 1918 had been the exception to the rule. This tactic had failed everywhere else. A protracted ‘war of position’ for control of the culture was, Gramsci believed, the most effective way of establishing a leftist stranglehold over society.

After Communist parties’ failure to establish political dominance in Western Europe after World War II, Gramsci’s path of “cultural Bolshevikism” became attractive to many West European leftists. It gathered apace after the 1968 student rebellions. Reflecting on this period as one who lived through it, then-Professor Joseph Ratzinger (now Benedict XVI) spoke of the violence and intellectual intimidation used by left-wing students against anyone disagreeing with them. Marxist ideology, he wrote, shook his university “to its very foundations.”

After 1968, many of Western Europe’s universities underwent a dramatic change for the worse. The professoriate became so monolithically leftist that it makes America’s reliably left-leaning Ivy League universities look like models of diversity. If you walk into most West European academic bookshops, you will find a preponderance of left-inclined work and struggle to find material presenting alternative views. This state of affairs has influenced thousands of West European students passing through these institutions.

None of this is to suggest that Western Europe is the victim of a mass decades-old conspiracy. But perhaps as the world prepares to celebrate the twentieth anniversary of Communism’s defeat in Central-East Europe, West Europeans might like to ask themselves why so many of them are so blasé about the influence of a philosophy that lead to the imprisonment, torture, enslavement and death of millions.

And they might get rid of those t-shirts.
Posted by Aaron at Wednesday, September 09, 2009