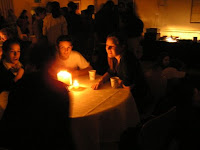 At this point a critical distinction is necessary. I have been speaking in general terms about the emerging church, which is a broad and multifaceted group, culturally and theologically. Even so, two distinct streams seem to diverge. Scot McKnight, a friendly but thoughtful critic of the movement, distinguishes two major forces in the emerging church: a missional force and a postmodern force.

This difference, it seems to me, is one of method vs. message. The vast majority of those in the emerging church – as high as 90%, according to Kimball – are engaged in a cross-cultural, missional enterprise that aggressively seeks to contextualize the timeless message of the Gospel using methods more friendly to postmoderns.

This move alone has drawn fire from the old guard. In my opinion, much of this criticism has been shallow. Far too much blood is being spilt on inconsequentials: order of worship, style of preaching, type of music, seating arrangements, and the like.

Though these functions are biblical, no particular forms are mandated. Most of these objections are little more than vindication of the cultural status quo. We have much bigger fish to fry.

My own concerns are theological and philosophical, not cultural. My uneasiness with the movement is not with the emerging church in general, but with a subgroup on the vanguard that I fear is being seduced by a postmodern culture God intended them to transform, not be transformed by. This subgroup goes by the name “Emergent,” a proper noun identifying those following the lead of the Emergent Village.

Neither of these groups – the emerging church nor the Emergent Church – is a monolith, true enough. I appreciate that many are sensitive to broad generalizations that may not fit them. But singling out specific people on specific offenses also has its perils. Some writers are notoriously vague and equivocal in their language. Others seem to cry “foul” regardless of accuracy if they’ve been cited in criticism.

Therefore, rather than spotlighting personalities, I’ve chosen to focus on a handful of specific ideas where the meanderings of some Emergent thinkers give me pause.

In sum, this is how I would distinguish emerging from emergent:

The emerging church may be applied to a broad group of church leaders and ministries who seek to take the gospel message and contextualize it for our "postmodern" generation.

The emergent church, on the other hand, is a subgroup of individuals and organizations within the much broader emerging church movement who have accepted postmodernism as a philosophy and have sought to interpret and preach the gospel from within a postmodern worldview. They contextualize the gospel to a point where the actual content of the gospel is distorted. This results in heretical and aberrant theology, as well as a false gospel.

Why is this important? A few reasons:

First, it is important for dialogue. When someone says they are part of an emerging church do not automatically assume this is a bad thing. This may simply mean they use candle lighting, sip coffee, and sit on sofas during their church service. There is nothing inherently wrong with this. These are simply different forms of the same function. Always ask the person what they believe personally and find out where they stand theologically and philosophically before bringing out the big apologetic guns. A person who says "I'm postmodern" may just like a certain style of architecture!

Second, it is important for discernment. Some Christians have not been careful to distinguish between emerging and emergent and have therefore lumped everyone together as heretics, regardless of their beliefs. For example, I have seen some Christians throw Dan Kimball and Dallas Willard into the same pile with Brian McLaren and Tony Jones. This is unfortunate. Even if you don't agree, for example, with Willard's view on spiritual formation, this is no reason to classify him with postmoderns who deny the objectivity of reality, truth, value, and reason. I think this reflects a lack of discernment and familiarity on the part of those Christians who fail to make these distinctions. We need to be able to distinguish essential Christian doctrine from secondary and even tertiary beliefs.

Third, it is important for doctrine. At the other end of the spectrum, some Christians are either ignorant or naive (or both) and have accepted everyone within the emerging church movement, no questions asked. I was recently told of a church leader saying there is nothing wrong with the teachings of a prominent emergent church leader and that it is safe for the youth to watch his videos and read his material. And at my Christian high school alma mater a video of this same individual was shown during chapel. The dangerousness of the emergent church is that it is a movement which has sprung up from within Christianity itself. Their books are sold on the same shelves and their teachings are commonly labeled "Christian." Church leaders must be ready to "exhort in sound doctrine and refute those who contradict" (Titus 1:9).

So is the "emerging church" bad? That all depends.

In conclusion, there is nothing inherently wrong with a church movement which seeks to contextualize the gospel for our current generation. Rather, this is something we should actively engage in. We should be ready to "become all things to all men, so that [we] may by all means save some" (1 Cor. 9:22). What we must never do is compromise truths of Scripture in an attempt to make Jesus or the gospel more palatable.

If you have not done so, check out this series of Solid Ground from Stand to Reason (note: you need an ambassador login to view past issues of solid ground. You may obtain a login for free at www.str.org)