The following is an article taken from the Liberty Counsel website: The highly controversial "stimulus" package is a monolithic spending bill containing language designed to stimulate the narrow interests of extreme left-wing activist organizations. The latest political payback tucked away in the estimated 1.1 trillion dollar spending bill will prove stimulating to religious censors and anti-faith groups like the ACLU.
Both the House and Senate versions contain anti-faith language that will censor religion and force people of faith from the public square. The bill states that stimulus funds may not be used for "modernization, renovation, or repair of [certain educational] facilities – (i) used for sectarian instruction, religious worship, or a school or department of divinity; or (ii) in which a substantial portion of the functions of the facilities are subsumed in a religious mission."
Several members of Congress, including Senator Jim DeMint (R-South Carolina), have attacked the 1.1 trillion dollar spending bill for its anti-faith censorship. DeMint stated that the bill would "empower the ACLU with ambiguous laws that create liability for schools, universities, and student organizations."
President Obama supports the package, but he could still request that Sen. Reid and Speaker Pelosi stop this blatant attack on people of faith. The House version of the bill (H.R. 1) passed on January 28 with only a 56-vote margin -- 244 to188. Eleven Democrats and every Republican voted against it. The Senate version (S. 336) is expected to come 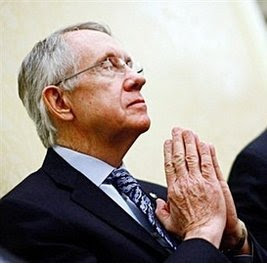 up for a vote within a few days.
Mathew D. Staver, Founder of Liberty Counsel and Dean of Liberty University School of Law, commented: "The so-called stimulus bill will lead to the banning of all religious activity from public facilities by forbidding the use of funds to improve places where religious instruction or worship occurs. In order to receive stimulus money our government will have to expel Bible clubs and weekend religious meetings. People who want to speak about their faith will be unwelcome in public places. Apparently, President Obama’s idea of faith-based initiatives is to remove faith from all initiatives."
Posted by Dan at Thursday, February 05, 2009