Clearly there have been and will likely continue to be abhorrent violent crimes committed against abortion providers and even the mothers of the aborted. Evil acts like this are unjustified and are as bad or worse than the abortions they are trying to prevent. However, there are no cases where these acts were done when a pre-existing law didn't already apply. Nonetheless, due to the public outcry resulting from violence outside abortion clinics in the 80's and 90's (yet failing to mention the violence inside), President Clinton enacted FACE (Freedom of Access to Clinic Entrances) which makes it a federal crime to use force, the threat of force, or physical obstruction to prevent individuals from obtaining or providing. Since this act only prevents actual threats of criminal behavior, several other cities and states have passed laws virtually outlawing the free exercise of non-threatening speech and even nonverbal body language. In essence, they have criminalized speech that makes certain people feel uncomfortable. No, I'm not kidding.

This isn't just a civil offense with hefty damages paid to litigants, but has been codified as a crime against society with imprisonment and heft fines for those found guilty. Here's a terrifying story from someone living through the strict enforcement and prosecution of this law first hand. The following is the complete text from "We Will Appeal This Verdict" dated January 19, 2009 by California Catholic Daily.

The Rev. Walter Hoye, a pro-life Baptist pastor from Berkeley, faces up to two years in jail and $4000 in fines following his conviction on two counts of “unlawful approach” in violation of Oakland’s restrictive new ‘bubble law.’ His attorneys say they plan to appeal.

Hoye had initially been charged with four counts of violating the ordinance – two counts of “unlawful approach” and two counts of using “force, threat of force or physical obstruction” against ‘escorts’ at Family Planning Specialists Clinic in Oakland. The charges stemmed from two separate incidents – one on April 29, 2008 and one on May 13, 2008. Hoye was arrested on May 13 after a clinic staff member called police. He was carrying a 40-inch sign that read, "Jesus Loves You & Your Baby. Let Us Help You," and attempting to hand out pro-life literature.

A regular fixture at the clinic and an outspoken opponent of the “bubble law,” Hoye had challenged the constitutionality of the ordinance in a federal lawsuit pre-dating his arrest. He had become a top target for the clinic staff.

Alameda Superior Court Judge Stuart Hing dismissed one count of using “force, threat of force or physical obstruction” before the trial got under way on Jan. 5. After deliberating for about two days, the jury found Hoye guilty on Thursday, Jan. 15, of two counts of “unlawful approach,” but not guilty on the remaining “threat of force” count.

Hoye is scheduled to appear before Judge Hing on Feb. 19 for sentencing. Hoye said the judge ordered him to stay 100 yards away from the abortion clinic and have no contact with anyone associated with the clinic while he awaits sentencing. “It is my prayer that God’s name be glorified and the life of His Son Jesus Christ be revealed in me,” said Hoye.

Katie Short of Life Legal Defense Foundation and one of Hoye’s attorneys, expressed concerns over the judge’s instructions to the jury, a concern echoed by Hoye. “The jury members came back to ask to watch the videos again and asked the judge to define what constituted an ‘approach,”’ said Hoye. “There is a clear definition given by the U.S. Supreme Court in a case related to a similar law, the law the Oakland law is based on, but he wouldn’t give it to them.”

The videos to which Hoye refers were recorded outside the abortion clinic on May 13 and presented as evidence by the defense during Hoye’s trial. The tapes showed that clinic employees approached Hoye, not the other way around.

Short said that, on appeal, the constitutionality of the ordinance would be challenged. In addition, she said, the prosecution failed to meet its burden of proof.

Short also cited the questionable testimony of Family Planning Specialists clinic director Jackie Barbic, who told the jury she came downstairs with a tape measure and told Hoye to back away from patients, staff and escorts. Barbic testified that Hoye then came very close to her, stared at her and made her and two escorts feel very threatened and intimidated.

“When Barbic was on the stand, she told that story, saying that Walter walked up to within a couple of feet of her, and she had to back away from him,” said Short. “Her voice actually choked with emotion as she recounted how frightened she had been. She didn’t know that Walter had someone videotaping him that day. So on cross-examination, we showed her the videotape of the incident, showing her approaching Walter, and him not moving an inch toward her. Up until then, she had detailed everything that happened at the clinic that morning. But when she saw the tape that debunked her story, she said, ‘Oh! I just remembered that there was another time later in the day when I was downstairs that he approached me.’ We have videotape of Walter from when he arrived to when he left. What a smart person would have done was look at the videotape and say, ‘Oh man, you know, I could have sworn he got closer and had a threatening look on his face.’ Instead, she still insisted that he had threatened and intimidated her, but just later in the morning. And she gave us some cock and bull story that she had the tape measure to show the escorts the zone.”

Short said she is also troubled by the interpretation of what constitutes an “approach” under the law. “The ordinance prohibits approaching within eight feet of someone entering an abortion clinic, without their consent, for the purpose of... let’s call it ‘communication,”’ Short explained. “The clinic director and escorts took this to mean that Walter could not approach them without their consent, even though they were not entering the facility and he was not trying to communicate with them.”

Hoye, who has no previous criminal record, rejected a plea bargain offered by the district attorney before trial. The deal guaranteed no jail time if Hoye pleaded guilty to one count in exchange for dismissal of the other three. “The threat of four years in jail is a potent one, but my client is more interested in getting the truth out, both on the sidewalk and in the courtroom,” commented Mike Millen, another Life Legal Defense Foundation attorney working on Hoye’s case, when the offer was turned down.

“This is a miscarriage of justice and we will appeal this verdict,” said Allison Aranda, a staff counsel for Life Legal Defense Foundation, in a prepared statement following the verdict. “After speaking with several jurors after the verdict was read, it is clear that the court's failure and outright refusal to instruct the jury regarding the key elements of the crime led to the erroneous conviction of Rev. Hoye.” The verdict came at the beginning of the holiday weekend honoring Martin Luther King Jr. -- an irony not lost on Rev. Hoye.

“It's Martin Luther King Jr.'s birthday again and I can still hear his words in my heart: ‘The Negro cannot win as long as he is willing to sacrifice the lives of his children for comfort and safety.’” [end of article] 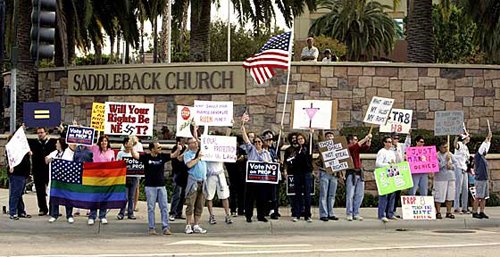 I can't help but wonder why the abortionists aren't guilty of the same law when they approached Rev. Hoye with their opposing points of view. It seems they are similarly "engaging in conversation" within "100 feet" of the entrance as well. Further, why are abortion centers the only shielded zones while there is no such law prohibiting people (i.e. Prop 8 protesters in the above photo) from "counseling" or "harassing" those going to church? It sounds like Oakland wants this law only to apply to people with certain views. Instead, cities and states should allow all free expression of ideas expressed within the confines of existing laws. Why establish a special class of victim rather than treating all victims equally regardless of their opinions? As long as the government remains true to the original intent of the Constitution under the power of the people, these laws can change. As sad as this to say, check your own state and city laws before voicing your opinion near abortion centers. If you don't like what you find, tell your state or city representative. Maybe there's even an effort underway by like minded people like you. So don't dismiss yourself as quickly as they want you to by underestimating the power of the democratic process. We can have an impact!
Posted by Dan at Friday, February 13, 2009

“Why establish a special class of victim rather than treating all victims equally regardless of their opinions?” – Well put.

I enjoyed reading your post even though I found myself getting upset on behalf of Rev. Hoye. The hypocrisy and injustice in such issues as; abortion and homosexuality is staggering to me. There seems to be a desire to change (there’s that word again) America into something completely different. I think it is illustrated for us by the protester (second photo) who replaced our Countries red and white stripes with their ideological rainbow colors.

Although I feel your post illustrates the inconsistent justice and I believe people should be allowed to share their views. I’m skeptical of signs that read "Jesus Loves You & Your Baby…" As true as that is, signs like these seem to create controversy that distracts from the issues. I may be wrong, but it seems to discredit the argument in the opponent’s mind, which of course is the person one would be trying to convince. They label you “religious”, resort to hateful name calling and then think they won the debate.