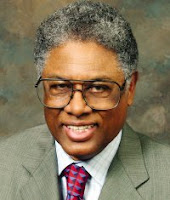 Letters from parents often complain of a sense of futility in trying to argue with their own children, who have been fed a steady diet of the politically correct vision of the world, from elementary school to the university.

Some ask for suggestions of particular books that might make a dent in the know-it-all attitude of some young people who have heard only one side of the story in classrooms all their lives.

That is one way of going about trying to de-program young people. There are, for example, some good books showing what is wrong with the "global warming" crusades or showing why male-female differences in income or occupations are not automatically discrimination.

Various authors have written a lot of good books that demolish what is currently believed-- and taught to students-- on a wide range of issues. Some of those books are listed as suggested readings on my website (www.tsowell.com).

Yet trying to undo the propaganda that passes for education at too many schools and colleges, one issue at a time, may not always be the best strategy. There are too many issues on which the politically correct party line is considered to be the only way to look at things.

Given the wide range of issues on which students are indoctrinated, instead of being educated, trying to undo all of that would require a whole shelf full of books-- and somehow getting the students to read them all.

Another approach might be to respond to the dogmatic certainty of some young person, perhaps your own offspring, by asking: "Have you ever read a single book on the other side of that issue?"

Chances are, after years of being "educated," even at some of the highest-priced schools and colleges, they have not.

When the inevitable answer to your question is "No," you can simply point out how illogical it is to be so certain about anything when you have heard only one side of the story-- no matter how often you have heard that one side repeated.

Would it make sense for a jury to reach a verdict after having heard only the prosecution's case, or only the defense attorney's case, but not both?

There is no need to argue the specifics of the particular issue that has come up. You can tell your overconfident young student that you will be happy to discuss that particular issue after he or she has taken the elementary step of reading something by somebody on the other side.

Elementary as it may seem that we should hear both sides of an issue before making up our minds, that is seldom what happens on politically correct issues today in our schools and colleges. The biggest argument of the left is that there is no argument-- whether the issue is global warming, "open space" laws or whatever.

Some students may even imagine that they have already heard the other side because their teachers may have given them their version of other people's arguments or motives.

But a jury would never be impressed by having the prosecution tell them what the defendant's defense is. They would want to hear the defense attorney present that case.

Yet most students who have read and heard repeatedly about the catastrophes awaiting us unless we try to stop "global warming" have never read a book, an article or even a single word by any of the hundreds of climate scientists, in countries around the world, who have expressed opposition to that view.

These students may have been shown Al Gore's movie "An Inconvenient Truth" in school, but are very unlikely to have been shown the British Channel 4 television special, "The Great Global Warming Swindle."

Even if we assume, for the sake of argument, that students are being indoctrinated with the correct conclusions on current issues, that would still be irrelevant educationally. Hearing only one side does nothing to equip students with the experience to know how to sort out opposing sides of other issues they will have to confront in the future, after they have left school and need to reach their own conclusions on the issues arising later.

Yet they are the jury that will ultimately decide the fate of this nation.
Posted by Aaron at Monday, February 16, 2009

More De-Programming Students:
Al Gore: Don't listen to your parents Ex-VP tells kids' conference 'older people don't know'
Posted: February 05, 2009
11:50 pm Eastern
© 2009 WorldNetDaily
Former Vice President Al Gore has been tape-recorded telling a conference of young people in Washington, D.C., just before President Barack Obama's inauguration that they know more than their parents.
The story appeared via Glenn Beck's television show on the Fox News Channel, where he had Caitlin Glenn and her father, Andy, discussing the speech today. A video of the program segment was posted on Beck's The Hope For America website. http://www.thehopeforamerica.com/play.php?id=311
On the tape, Gore states: "When I was your age and the civil rights revolution was unfolding, and we kids asked our parents and their generation, 'Explain to me again why it's okay for the law to officially discriminate against people because of their skin color?'
"And when our parents' generation couldn't answer that question, that's when the law started to change. There are some things about our world that you know that older people don't know," he continued.
"Why would that be? Well in a period of rapid change, the old assumptions sometimes just don’t work anymore because they're out of date," Gore said.
Caitlin had been invited months before the election to the event that featured Gore as a speaker, and she was excited to attend the invitation-only event.
Her father said the family thought it an "incredible opportunity" for her
The discussion about taping the speech came up late in the fall when Obama had won the election and was headed toward the White House, Andy Glenn said.
"We realized what she would be facing … Caitlin and I started having a lot of discussions," Andy Glenn said.
The talks focused on what Gore would say.
"I wanted to hear what he has to say to you," Andy Glenn recalled telling his daughter.
Caitlin Glenn said she was shocked by the instructions essentially to ignore her parents.
"We're only teens
and preteens and he was telling us to do these things," she said.
Andy Glenn said when he picked up his daughter, he popped the tape into the player in his car.
"That section you just played actually was one of the first sections," he told Beck. "Right after [I heard] that I stopped it. I was so upset. I was yelling … he just told my daughter not to listen to me.
"Even coming from Al Gore I was absolutely shocked to hear that," he said.
Gore could not be reached tonight by WND for a comment
http://www.wnd.com/index.php?fa=PAGE.view&pageId=88112

This is such an excellent point. It not only applies to the politically correct arena, but even in religious circles the same logic applies. There are many people who hold certain doctrinal views and completely reject others without ever having read the arguments in favor of those other views.

I'm not talking about the core beliefs, but rather things like denominational differences. For example, I run into a lot of people who flatly reject Calvinistic views, but have never read anything by those who believe those views are biblical. They only repeat the negative which they have heard from others without looking into why some people hold the views they do.

I am going to take Mr. Sowell's advice. The next time that I run into someone with a "superior liberal intellect" who is telling me that I am destroying the planet because I am not doing this or that, I will ask if they have ever read or seen anything that refutes the global warming propaganda. I will use his analogy of a court room and politely let them know that I would be happy to discuss specifics with them once they have taken the initiative to broaden their knowledge of the subject.

I think you are exactly right. I especially find this question helpful when talking with skeptics or members of theological cults.

For example, suppose you run across someone who has just seen the internet movie "Zeitgeist," and they begin asserting that Jesus is nothing but an astrological myth and the New Testament copied ancient Greek pagan religion. You might reply, "So how many books have you read on the ancient evidence for the life of Christ?" or "How many books have you read that show the inaccuracies and false claims made in Zeitgeist?"

When speaking with a Jehovah's Witness, you might say, "So how many books have you read that argue against your point of view?" This is especially effective I think since JW's are not encouraged to read "apostate" literature, that is, literature which criticizes the Watchtower Bible and Tract Society.

What this question does effectively is knock the individual off of their epistemic stool. In other words, most people making these sorts of claims don't really know what they are talking about. They are simply repeating what they have been told and have never been challenged on it, so they are used to getting away with making these bold, false assertions. They have been "puffed up" with false knowledge. They envision themselves standing on their stool of knowledge looking down on you. It is your job to knock the stool out from underneath them, with love and gentleness of course! This question does that quite nicely.