What Abortion Really Is 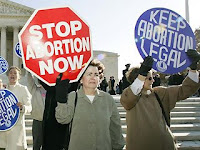 Today is Sanctity of Life Day, 2009. It's impossible to speak about the sanctity of life without addressing the issue of abortion. And you cannot address the issue of abortion without talking about what abortion is. Think about the word "abortion." What comes to mind? For many people, the word "abortion" conjures up images of a pro-choice or pro-life protest (or maybe even the bombing of an abortion clinic). Why? Because the majority of people receive their news information through visual media. And when the media portrays the issue of abortion the pictures that are put before us time and time again are like the one shown here: two protesters holding signs. But is that what abortion really is? Absolutely not. Abortion is not a protest. Abortion is not a bombing. So how do you successfully communicate what abortion really is with a culture that, in the words of Ravi Zacharias, listens with its eyes and thinks with its feelings? You show them. Meaning needs to be restored to the word abortion before dialogue can take place. And to understand what abortion is you must see what abortion is. The following video shows abortion for what it really is.

Warning: This video is extremely graphic.

It is hard to watch a video such as this and think that abortion has anything to do with what is typically portrayed on television or in the news media. Many people object to the use of graphic images when it comes to the issue of abortion. But why? We use graphic images all the time to communicate the horrors of the holocaust, starvation, and violent acts of terrorism. The question is not whether or not these pictures are emotional. They are. The question is whether or not these pictures are true.