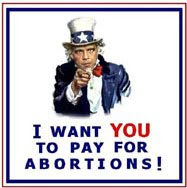 Washington, DC (LifeNews.com) -- Officials with the incoming administration of Barack Obama have confirmed that he will indeed overturn a pro-life policy of President Bush on his first day in office. Despite campaigning on the rhetoric of wanting to reduce abortions, Obama will make one of his first actions promoting them globally.

Meanwhile, some 77 members of Congress have signed onto a letter asking Obama to back down from doing so.

President Bush used an executive order on his first day in office to reinstitute a pro-life policy that prevents forcing taxpayers to fund international groups that perform or promote abortions in other countries.

While U.S. law prohibits funding abortions directly, Bush's Mexico City Policy expands the law by also prohibiting the funding of pro-abortion groups that either do abortions overseas or lobby pro-life governments to sacrifice their abortion limits.

During the presidential election, pro-life groups issued a clarion call to voters telling them their tax money would be used if Obama were elected and saying he would likely reverse the Mexico City Policy immediately after taking office.

The capital publication Congressional Quarterly reports that top Washington officials tell it that the incoming president will reverse the pro-life measure on his first day as president, on Wednesday.

When Obama overturns the limits on global abortions, he will do so over the objections of dozens of members of Congress.

"As a new administration begins, it is our hope you will work, as you have pledged, to create a new era of bi-partisan cooperation. We urge you to continue the Mexico City Policy, which separates abortion and family planning in America's foreign aid programs," the bipartisan group of lawmakers wrote Obama on Friday.

The members, led by Rep. Doug Lamborn of Colorado and Joe Pitts of Pennsylvania, also say it is "insulting" to other nations to promote pro-abortion groups that lobby them to overturn long-standing pro-life laws based on their culture and heritage.

"We also have a responsibility to respect the laws of many developing countries who have laws prohibiting or restricting abortion. It is an insult to fund organizations that are intent on overturning those laws by promoting the Western ideology of abortion on demand," they said.

But Douglas Johnson, the legislative director of National Right to Life, tells LifeNews.com the Mexico City Policy and Obama's reversing it is all about abortion.

Thus, it appears Obama's move will take money away from non-abortion groups that provide services to poor people in foreign nations.

"One effect of Obama's anticipated order will be to divert many millions of dollars away from groups that do not promote abortion, and into the hands of those organizations that are most militant in promoting abortion as a population-control method," Johnson explained.

"So, a president who not long ago told the American people that he wanted to reduce the number of abortions, is already effectively promoting the increased use of abortion as a means of population control," Johnson added.

President Reagan first put the Mexico City Policy in place and it is named for a population conference that took place in the Mexican capital in 1984 when he introduced it.

Under the Mexico City Policy, funding for family planning programs is not reduced.
Posted by Aaron at Wednesday, January 21, 2009