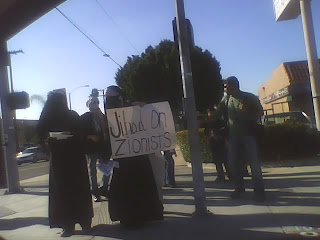 A friend of mine from church went to an anti-Israeli protest this past weekend. She sent me this picture and an e-mail of which the following is an excerpt:

"We went out to one of the anti-Israeli protests yesterday right there in Anaheim. It was fairly big, and very, very hostile. Tons of anti-Israeli stuff around, chanting about the infitada, etc. Signs with the Star of David on it and a swastika written over it. Anti-Jew, anti-American signs, death to Israel, death to America. Just ugly stuff.

George (the director of ACP) and I got out and walked around, and the anger and hate was so intense it was out of control. At one point when George was speaking about Christ being the only way to peace and that the land in Sudan, Syria, Jordan, Lebanon etc., had all been taken over by the sword and Muhammad, and that Islam was the problem, he and I were surrounded by a pack of Muslims full circle. They shouted over George, even threatened us. George had to call the police from his cell phone. But they, of course, never showed up.

Anyway, I wanted to share a picture of two girls who might have been in their late teens, early 20's, who were at the protest standing on the corner, dressed in full Hamas terrorist garb head to tow, holding a sign reading 'Jihad on Zionists.' They are calling for the out right killing of the Jews, right here in the good old USA. Who would have ever thought, that you could present yourself as a Hamas terrorist and hold a sign promoting murder?

The time has come when American citizens ARE in fact turning there backs on Israel and God. When we were leaving, George tried to talk to a young Arab couple with a baby. He told them that he was a Chirstian from Sudan, and that tons of Christians in Sudan were being murdered. What about them? The woman turned around to George and said to him, 'I hope you are one of them.' My friends, the time is short."

Pray for Israel. Pray for the Jews.

*Photo used with permission by Anna Wong
Posted by Aaron at Monday, January 05, 2009

Email ThisBlogThis!Share to TwitterShare to FacebookShare to Pinterest
Labels: Islam