Do Roman Catholics and Muslims Worship and Believe In the Same God? 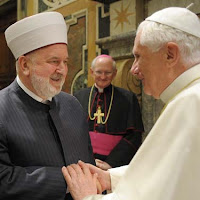 Section 841 of the official Catechism of the Catholic Church states the following:

The Church's relationship with the Muslims. "The plan of salvation also includes those who acknowledge the Creator, in the first place amongst whom are the Muslims; these profess to hold the faith of Abraham, and together with us they adore the one, merciful God, mankind's judge on the last day."

In dialoguing with my Roman Catholic friends I have often asked them what they make of this section. Do Roman Catholics really believe that Muslims worship and believe in the same God? One of my friends responded by saying that the word "same" is not used in the section above, though I think the context clearly indicates this. Nevertheless, I felt this topic was something I needed to look at closer.

A short while after I happened to stumble across this post by TurretinFan of Alpha and Omega Ministries. It contains several quotes directly relating to this matter from the two most recent popes, John Paul II (JP2) and Benedict XVI (Ben16). These quotes show that both popes have clearly indicated that Muslims do in fact worship and believe in the same God:

"As I have often said in other meetings with Muslims, your God and ours is one and the same, and we are brothers and sisters in the faith of Abraham."

JP2 1985 (source")
"I thank you for your visit, all representatives, leaders, of the Muslim community here in Uganda. Archbishop Wamala said that you are cooperating and that in doing so, you are also accomplishing the will of God, our Creator, our Father. God has created all of us, men and women, the whole human race, to cooperate–to cooperate in order to improve the world. He, our God, committed us, the world, to being inhabited, to being used, not abused, not abused, used, and to serving the human being, human existence. It is necessary to cooperate all together, for the riches of the world are sometimes in danger and the human community is many times is in danger. It requires the cooperation of all of us who believe in the same God, the one God of Abraham, the Father who gave us his son Jesus Christ. Thank you very much for your visit."

"We Christians joyfully recognize the religious values we have in common with Islam. Today I would like to repeat what I said to young Muslims some years ago in Casablanca: “We believe in the same God, the one God, the living God, the God who created the world and brings his creatures to their perfection” (Insegnamenti, VIII/2, [1985], p. 497)."

JP2 1999 (source")
"This year is also the 40th anniversary of the conciliar Declaration Nostra Aetate, which has ushered in a new season of dialogue and spiritual solidarity between Jews and Christians, as well as esteem for the other great religious traditions. Islam occupies a special place among them. Its followers worship the same God and willingly refer to the Patriarch Abraham."

Personal Reflection: It should be clear to anyone who has compared the teachings of Islam with the teachings of orthodox Christianity that the two do not worship or believe in the same God. How could they? Islam and Christianity hold to contradictory, mutually exclusive beliefs about God. One example should suffice: the Trinity. One of the great doctrines Muslims hold to is that of tawhid, or God's oneness (Sura 112). To ascribe partners to God, as Muslims claim Christians do with the concept of the Trinity, is to commit shirk, the greatest sin imaginable for the Muslim. On the other hand, the doctrine of the Trinity is an essential Christian doctrine! Never mind any similarities there may be between Allah and the Christian God, it is the differences that matter.

As I have pointed out to my Roman Catholic friends, I believe this obviously false teaching greatly undermines the authority of the Roman Catholic Church (RCC). The teachings contained within the Catechism are supposed to be without doctrinal error. The teaching of the "infallibility of the church" places a tremendous burden of proof on Roman Catholics. If one teaching or doctrine of Roman Catholicism can be shown to be false, the entire system of infallibility collapses. In other words, if the Catechism is wrong in one area, where else is it mistaken? This is why one of the great "solas" of the Protestant Reformation was sola scriptura. The Bible alone is God-breathed (theopneustos, 2 Tim. 3:16) and is therefore the only adequate and infallible rule of faith for the church. (As a side note, Protestants do face a similar problem when they reject biblical inerrancy, i.e. if the Bible is wrong in one area, where else is it mistaken?)

To be sure, I do not believe Roman Catholics worship a false god. Historically, orthodox Roman Catholics and Protestants have held to the same beliefs concerning the nature and character of God. At the same time, I am quite certain that Muslims do not worship the God of the Bible. That is why a teaching such as this, contained within the Roman Catholic Catechism and taught by the two most recent popes, leaves me absolutely bewildered and disturbed as to why anyone, pope or no pope, would ever try to equate Allah with the God of the Christian faith.
Posted by Aaron at Saturday, February 21, 2009

I don't think the universal Church has started to err in teaching the truth. It appears, however, that her government has stopped loving the truth. For example, it should not be possible, when reading the Catechism, to scratch your head and wonder, "So is the death penalty a sin or not?" (it is not). Similarly, one should not be left trying to extrapolate the truth from the paragraph that you have quoted. "The one" is too similar a phrase to "one and the same".