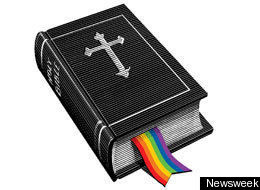 Newsweek magazine's cover story on December 15, 2008, read "The Religious Case for Gay Marriage." It featured an article by religion editor Lisa Miller entitled, "Our Mutual Joy," in which she attempted to argue a biblical case for gay marriage.

There have been several prominent scholars and theologians who have responded to this piece in length. Kevin Lewis, Christian apologetics professor at Biola University, has written an article which you can read here. Dr. Albert Mohler, president of The Southern Baptist Theological Seminary, has responded here. The Family Research Council has also posted a point-by-point rebuttal on their blog which you can read here.

As these articles show, liberals must constantly take passages out of context, undercut Scripture, and resort to fallacious reasoning in endeavoring to make their point. If proponents of same-sex marriage want to defend their case, fine. Muster your best arguments and present them in public debate. But let us not resort to intellectual dishonesty, bad logic, and poor hermeneutics in an effort to distort the clear teaching of Scripture.
Posted by Aaron at Monday, December 22, 2008

All three responses to this article hit on an important observation: Miller's tries to make her case by affirming her view of scripture and defeating scripture at the same time. This nonsense (and lack of evidence to support her view) shows that she has an intention that goes beyond the desire to discover truth. Instead, she tries to argue from her own previously committed presuppositions and her case fails. The level of spiritual warfare really rears it's head when we see such high level journalism fall to such spiritual depravity. It's sad to see otherwise smart and capable people with such damaged spirituality.