Can God Make a Rock So Big He Cannot Lift It? 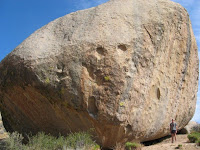 This is one of my favorite questions that comes up from time to time. Indeed, many atheists and skeptics have posed this question in an attempt to stump Christians and somehow disprove the omnipotence (and existence) of God. Maybe you've been there. What is so ironic about a question of this type is that rather than prove any sort of deficiency in the character or nature of God, this question actually shows a lack of clear thinking and logic on the part of the skeptic! In other words, the question itself is flawed and fallacious in several ways and, unfortunately, the person raising the question has not taken the time to truly think this problem through.

Problem #2: this question commits a categorical fallacy. The question itself is incoherent and meaningless. Suppose I were to ask you, "What does the color blue smell like?" or "How much does the number seven weigh?" These are category mistakes because colors don't smell and numbers don't weigh anything. They are logical impossibilities. In the same manner, asking the question "Can God make a rock so big He cannot lift it?" is essentially to ask "Can God's power defeat His own power?" This is nonsensical and a category error since the question is being incorrectly applied. Greg Koukl has stated, "The question is nonsense because it treats God as if He were two instead of one. The phrase 'stronger than' can only be used when two subjects are in view...Since God is only one...it makes no sense to ask if He is stronger than Himself."

Problem #3: this question commits a straw man fallacy. The goal of the skeptic who asks this question is to somehow undermine the Christian concept of an omnipotent God. It is thought that if it can be shown there are some things God cannot do, this would prove that God could not be omnipotent and thus could not exist as Christians have traditionally portrayed Him. However, this line of reasoning is attacking a distorted concept of Biblical omnipotence and is therefore guilty of the straw man fallacy.

So what does it mean then that God is omnipotent? Omnipotence doesn't mean that God can do anything. There are actually quite a few things that God cannot do. He cannot make squared circles. He cannot make a one-ended stick. He cannot sin. He cannot improve His morality. So God is "limited" in a sense. But not one of these "limitations" has to do with power, rather, they are logical contradictions. Also, notice that His "limitations" are not due to any defects in His character or power but rather they are the result of His perfection and rational nature! As Norman Geisler has stated, "He is only 'limited' by His unlimited perfection." To say that God is omnipotent then is to say that God can do anything so long as it is logically possible and consistent with His nature. God's omnipotence does not mean that He can do what is impossible but only that He can do whatever is actually possible.


I know very well that if it is self-contradictory it is absolutely impossible...His Omnipotence means power to do all that is intrinsically possible, not to do the intrinsically impossible. You may attribute miracles to Him, but not nonsense...It remains true that all things are possible with God: the intrinsic impossibilities are not things but nonentities...nonsense remains nonsense even when we talk it about God (Problem of Pain, 18).